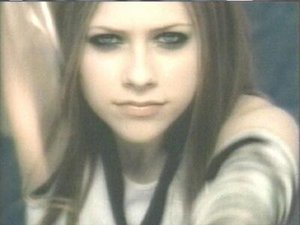 Avril Lavigne in her music video for the song 'Complicated' (2002)

Avril Ramona Lavigne (born September 27, 1984) is a Canadian singer and songwriter. She was one of the most popular new pop punk artists of 2002, when she released her first album, and is well-known for her 'skater punk' persona.

Born in Napanee, Ontario to conservative parents, Lavigne grew up singing country music and in a church choir and taught herself guitar. She was discovered by her first professional manager while singing country covers at a Chapters bookstore in Kingston, Ontario. By the age of 16, she was signed by Arista Records head L.A. Reid, and she subsequently moved to New York City to work on her first album. 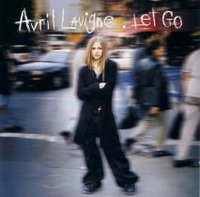 Lavigne on the cover of Let Go

Apparently, early attempts to co-write songs for her failed to meet her approval, and she eventually moved to Los Angeles, California and co-wrote her album with Clif Magness and songwriting team The Matrix, whose previous work included songs for Sheena Easton and Christina Aguilera. Her first album, Let Go, was released by Arista on June 4, 2002, and was certified 'Quadruple Platinum' less than six months later by the Recording Industry Association of America. She was named 'Best New Artist' at the 2002 MTV Video Music Awards and at the 2003 Juno Awards, where she led all musicians with six nominations, winning four Junos. She also has been nominated for eight Grammy Awards but has not won any to date.

As of June 2004, Let Go had sold 14 million albums and reached the number one spot in the United Kingdom, Australia and Canada and #2 in the US. In the U.K., Lavigne was the youngest female artist ever to have a number one album, although this record was later broken by Joss Stone. Let Go spawned 5 hit singles (the first 3 with The Matrix), in various parts of the world:

Weird Al Yankovic did a parody of 'Complicated' on his Poodle Hat album—a sure sign of her impact on popular culture.

The media has often compared her to Alanis Morissette, though she has been criticized for not being as strong a lyricist as Morissette at the same age. She has also often been compared with singers like Vanessa Carlton and Michelle Branch, who emerged at about the same time and were popularly credited, with Lavigne, as part of a trend towards more earnestness and genuine creativity in an often vacuous and pre-fabricated teen pop music market.

While her marketing has been every bit as sophisticated as, for instance, that of Britney Spears and her competitors, a profile in the Washington Post found that in the flesh, her personality reflected the marketing and found her, if anything, something of a wide-eyed innocent, citing the fact that she was intending to purchase her first Ramones CD. In another interview, she listed her current listening tastes as including Blink 182, Sum 41, and System of a Down. Lavigne had a close friendship with Deryck Whibley of Sum 41 and hired a former member of that band Mark Spicoluk as a member of her backing band.

She describes her first album as a pop album with 'a couple of rock songs on it,' and has indicated a desire to write more rock-oriented songs in the future. 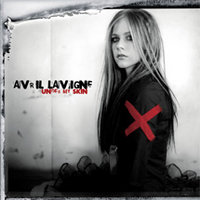 Lavigne on the cover of Under My Skin

Lavigne wrote most of her second album, Under My Skin, with Canadian singer-songwriter Chantal Kreviazuk. She also co-wrote one track, 'Nobody's Home', with Ben Moody, formerly of Evanescence, and the rest with her former guitarist Evan Taubenfeld. Lavigne used three producers for Under My Skin, notably:

Under My Skin was released on May 25, 2004 and went to #1 around the world, notably in the UK, USA, Canada and Australia and on the Billboard Internet charts. The first single, 'Don't Tell Me', was released early, and as at June 2004, has gone to #1 in Argentina, top 5 in the UK and Canada, and top 10 in Australia, Brazil and a European composite chart.

The second single, 'My Happy Ending', reached #9 on the Billboard Hot 100, making it her third biggest hit as of late. She made the music video to the track in Actor/Singer Eric West's neighborhood. The third single from Under My Skin is 'Nobody's Home'.

Lavigne has a star tattooed on the inside of her left wrist, applied at the same time as friend and musical associate Ben Moody's identical tattoo. In late 2004, she had a small pink heart-shaped tattoo featuring the letter 'D' applied to her right wrist - thought to be a reference to boyfriend Deryck Whibley.

She has admitted to Rollingstone.com that she got into some fights one night. 'The other night, I got into three fights,' says Lavigne. 'I was at a club and some girl was giving me attitude. She pushed me and I got her down on the floor. Security came, and because I was on top, they threw me out.'

Lavigne travels with a bag full of about 30 neck ties. Some of them she bought, and the rest of them she just takes from her dad.

She is a smoker.

Avril Lavigne broke a record set by Madonna. Her song 'Complicated' held the number one spot on the Contemporary Hit Radio chart (which tracks air play on the radio) for 11 weeks in a row. Madonna previously held the record with her song 'Music', which held onto number one for 10 weeks.

Her 'skater chick' fashion style was one of the most imitated of 2002. In March 2004, she became involved in a celebrity feud with Hilary Duff: Duff reportedly criticized Lavigne after she apparently got mad at her fans for dressing like her. Duff called her 'mean-spirited' and said, 'You should be happy that these people like you and look up to you.'

During an interview for a Boston radio station, Lavigne then said that Duff was a 'mommy's girl' and a 'goody two-shoes.' She then said to Duff (who was not present during that interview), 'You can go screw yourself'. Reportedly, Lavigne also said about Duff, 'I'm sure she's really nice and sweet. I'm sure she's all smiles.'

During that same interview, she spotted a picture of herself and ripped it up, allegedly saying 'I hate that fucking photo!' All this happened while on air. According to Lavigne, she had permission to take the picture down—station personnel encouraged her to take it down.

In 2003, it was reported that Lavigne was romantically involved with then band member Jessie Colburn.

She is currently dating Deryck Whibley from the pop punk band Sum 41. She also bought a house with him in Beverly Hills. It was reported in September 2004 that she was engaged to him, but this was subsequently denied by Sum 41's management.

Deryck Whibley has recently stated that, in fact, he would be marrying Avril. Sum 41's management still adamantly denies the allegations which has led to conflict.

Her nickname is Avie.

Lavigne has also covered the following songs during live performances:

Wikiquote has a collection of quotations related to:
Avril Lavigne


This biography is published under the GNU Licence


Items to buy by Avril Lavigne