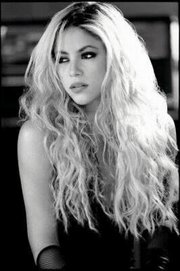 Shakira is a Spanish name that came from the Arabic word for 'graceful'. She speaks English, Spanish, Arabic, Portuguese, and Italian, and she can perform Arab belly dancing, which was taught by her Lebanese grandmother.

Shakira was born in Barranquilla to a Lebanese father and a Spanish-Italian mother, and moved to Bogotá at the age of thirteen. She released her first album, Magia (Magic), one year later, on the Sony label. The album was only moderately successful, and Peligro (Danger), her second album, was no better received.

Shakira turned to acting and played a role in a Colombian telenovela ('El Oasis'), but returned to the music business in 1995 with the album Pies Descalzos (Barefeet), which established her commercial success. The hit 'Estoy Aquí' became known internationally. The Remixes was created and featured remixes from the songs on Pies Descalzos.

Following this, Shakira met Emilio Estefan, Jr., who would become the executive producer of her next album. żDónde Están los Ladrones? (Where are the Thieves?) was a huge production which cost over $3 million US. It was a huge hit which gained wide critical acclaim and which many consider to be her best album ever.

It produced the singles 'Inevitable' and the worldwide mega-hit, 'Ojos Así'. Its successful blend of rock and Latin soundscapes made it an immense success. Shakira also produced Shakira MTV Unplugged, a live album based on żDónde Están los Ladrones?. She became widely known throughout the entire Spanish speaking world.

Shakira next turned her sights towards the English-speaking market, improving her English enough to begin writing Laundry Service. With a more rock-edged feel, Laundry Service was aimed at the international English market although it contained some Spanish songs. Some people said that Shakira's English skills were too weak for her to write in English, but Laundry Service was nevertheless a big hit, best known for the infectious single 'Whenever, Wherever' (English version of 'Suerte'), and for being one of the top albums of 2002. Shakira is well known for intense, athletic performances involving belly dancing and arabic rhythms.

In 2002, Shakira also released the greatest hits volume Grandes Éxitos. Shakira: Live & Off the Record, a DVD and a 10-song CD from her 2002-03 world tour (the 'Tour of the Mongoose'), was released March 30th, 2004. 'The Tour of the Mongoose' was so-called because a mongoose is the only animal that can defeat a cobra without being killed by its poison. The concerts were interspersed with visuals of a mongoose fighting a cobra.

Shakira is currently writing and recording her next album, scheduled to come out in early 2005. This is rumoured to be a Double CD featuring both Spanish and English songs. She co-writes and co-produces her songs with Luis Fernando Ochoa and Lester Méndez.

Shakira is considered by many to be a great talent. As Gabriel García Márquez once wrote of her, 'Shakira's music has a personal stamp that doesn't look like anyone else's and no one can sing or dance like her, at whatever age, with such an innocent sensuality, one that seems to be of her own invention.'

Since 2000, she has been engaged to Antonio de la Rúa, the son of the former President of Argentina. In light of the humanitarian and social crisis in Argentina, many members of the press lampooned the relationship as frivolous and arrogant. In response, Shakira gave an unprofitable concert in Buenos Aires and further promoted her humanitarian children's foundation 'Pies Descalzos' (Bare feet), named after her third album. This was decried by many as a simple celebrity public relations move.


Items to buy by Shakira