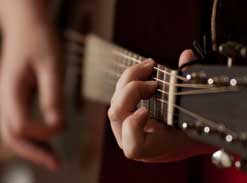 
A collection of pieces in fingerpicking style for solo guitar. Easy to Intermediate Level 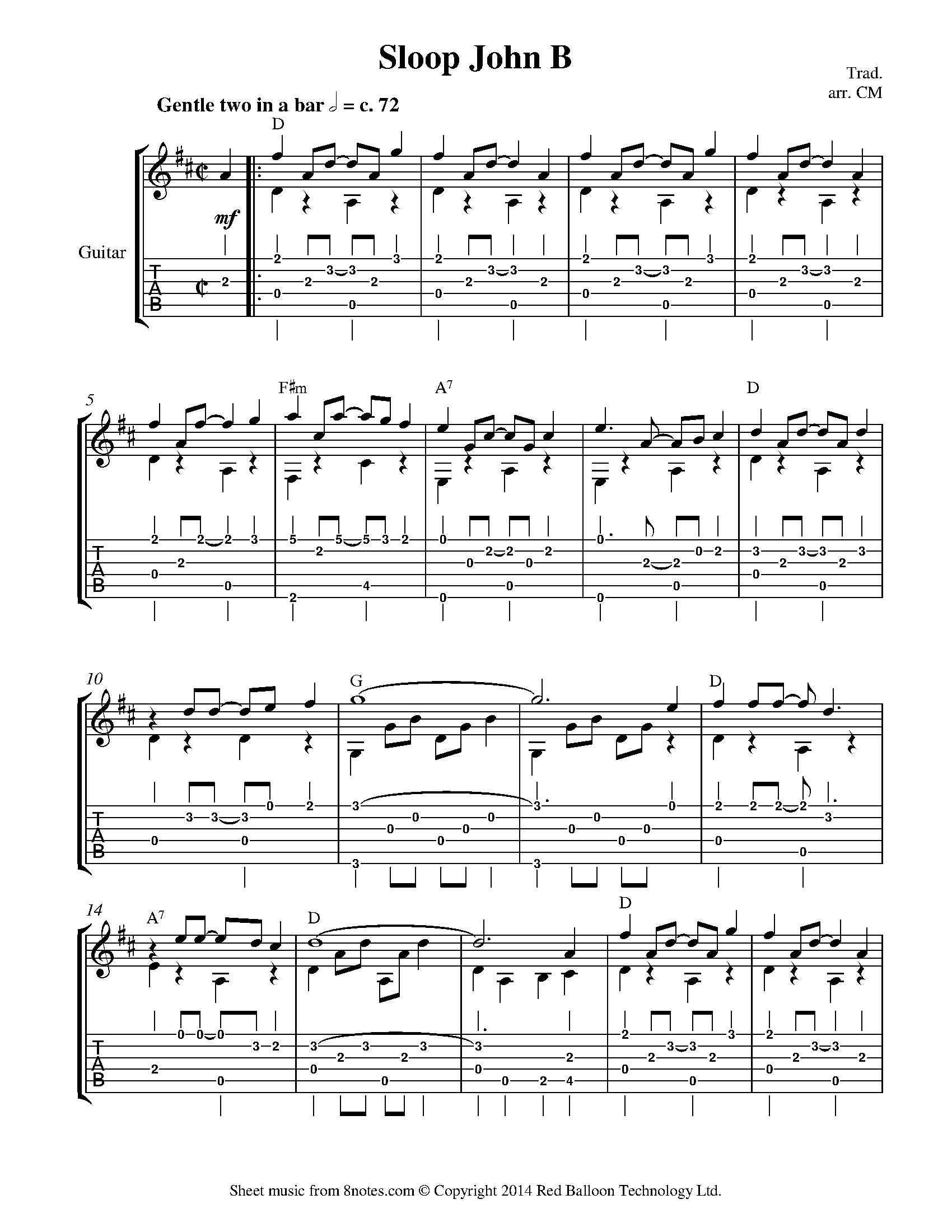 "Honeysuckle Rose" is a 1929 song composed by Fats Waller with lyrics by Andy Razaf. It was introduced in the 1929 Off-Broadway revue "Load of Coal" at Connie's Inn as a soft-shoe dance number. Waller's 1934 recording was inducted in the Grammy Hall of Fame in 1999. 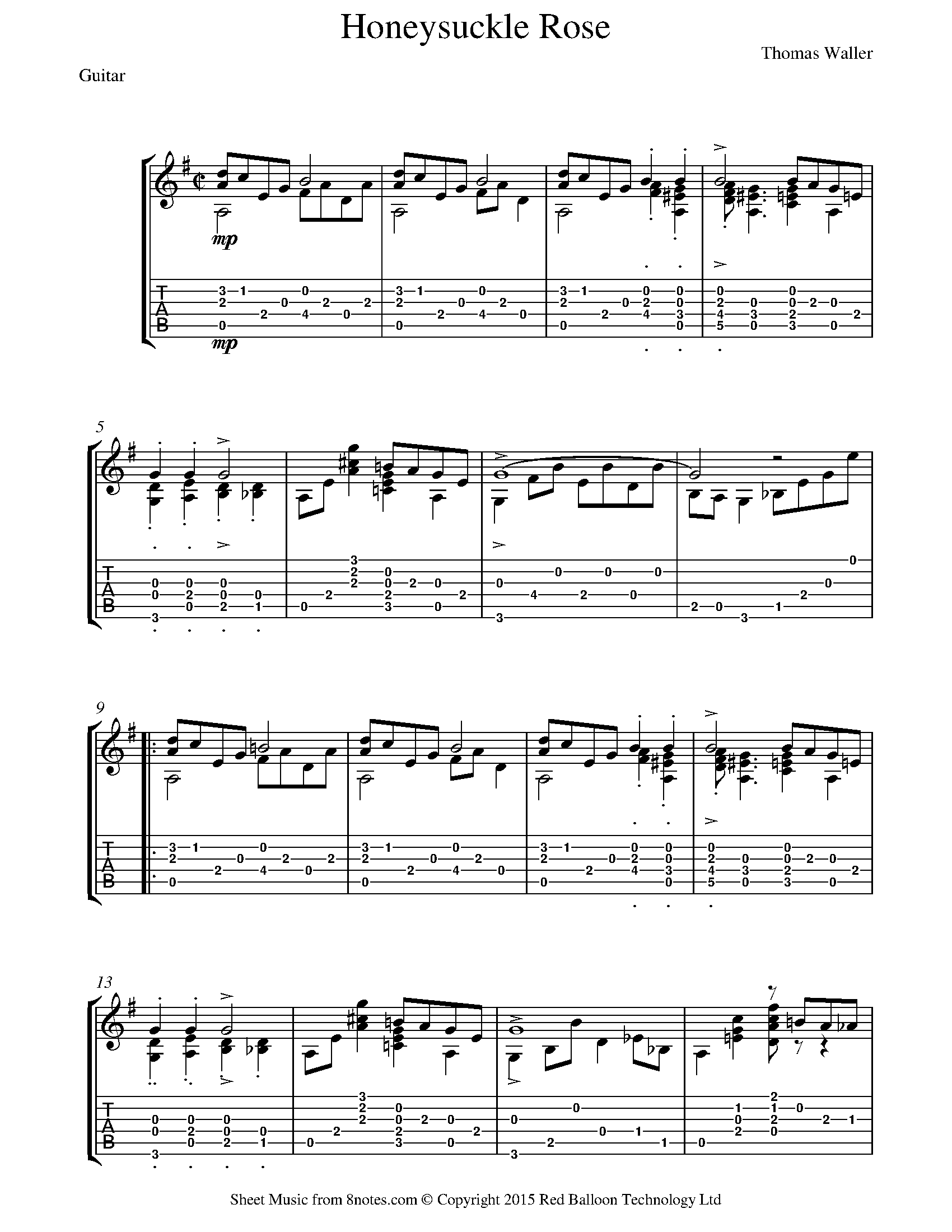 Home on the Range is a classic western song, sometimes called the "unofficial anthem" of the American West. The lyrics were originally written by Dr. Brewster M. Higley of Smith County, Kansas in a poem entitled "My Western Home" in the early 1870s. In 1947 it became the state song of the American state of Kansas. Members of the Western Writers of America chose it as one of the Top 100 Western songs of all time. 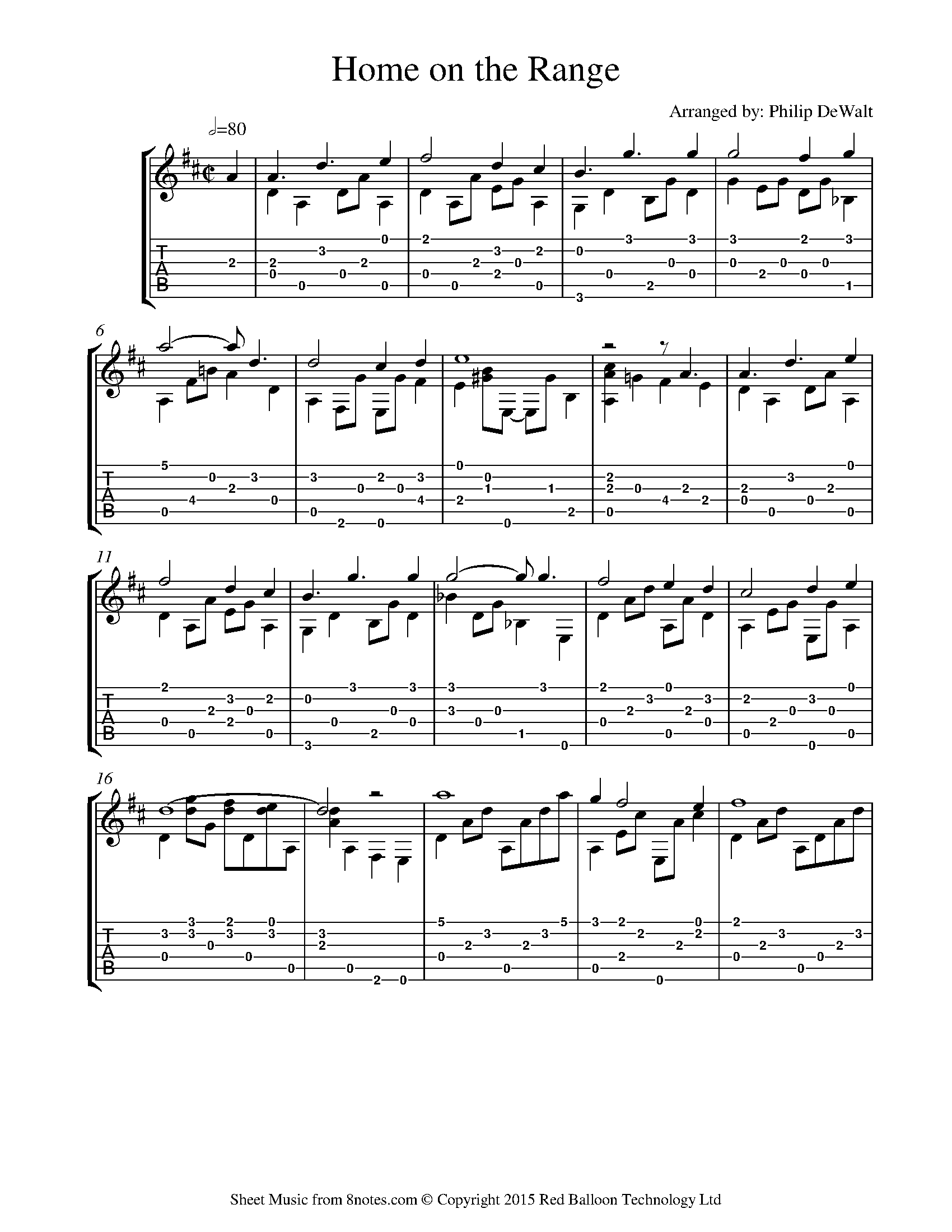 Home on the Range

"Freight Train" was written by the teenaged Elizabeth Cotten in the early 20th century. It was inspired by the sound of the trains near her home in North Carolina. It became popular in the 50s in 60s, with performances by the Beatles/Quarrymen and other British skiffle groups. In the U.S. it was performed as part of the wider folk revival, with Rusty Draper's version reaching the top ten in 1957. 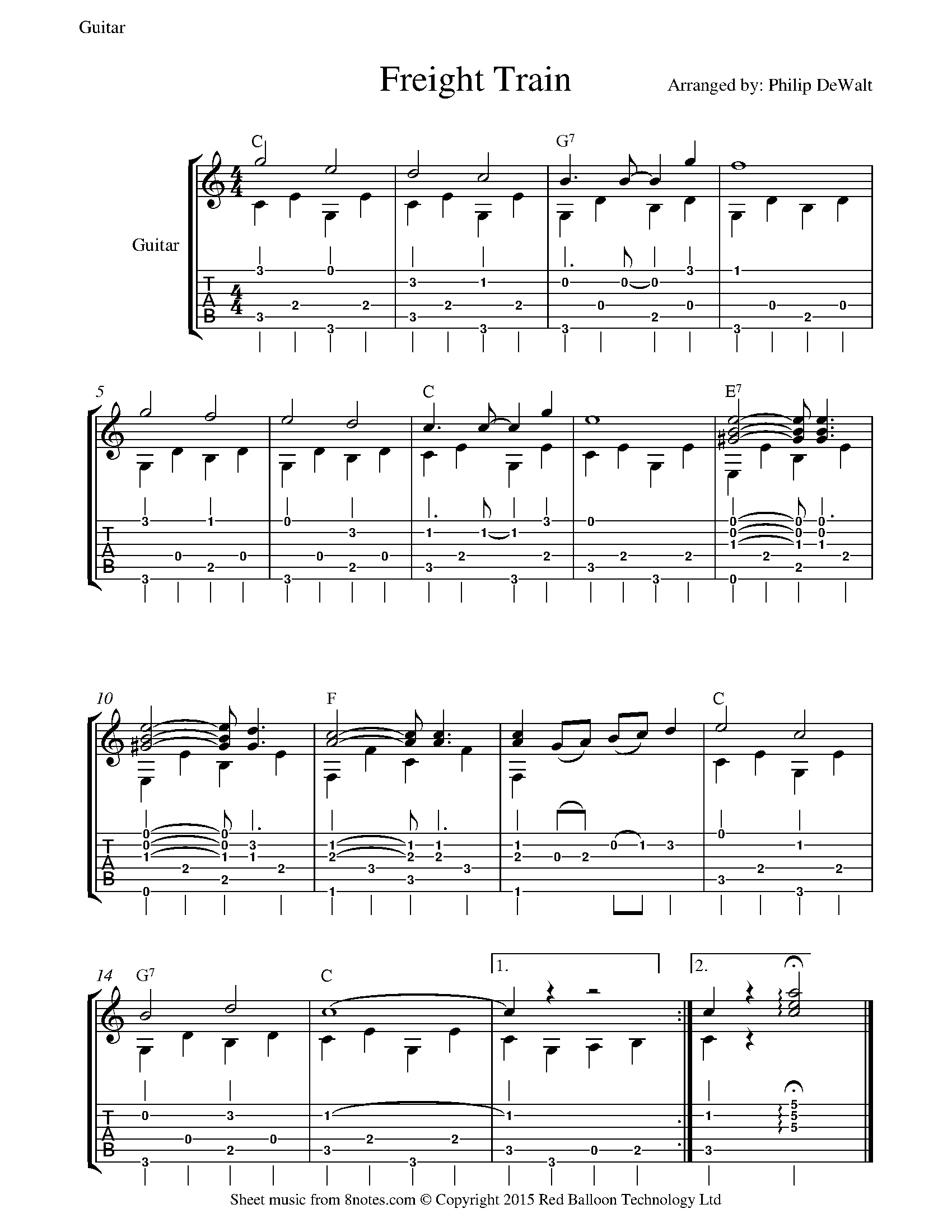 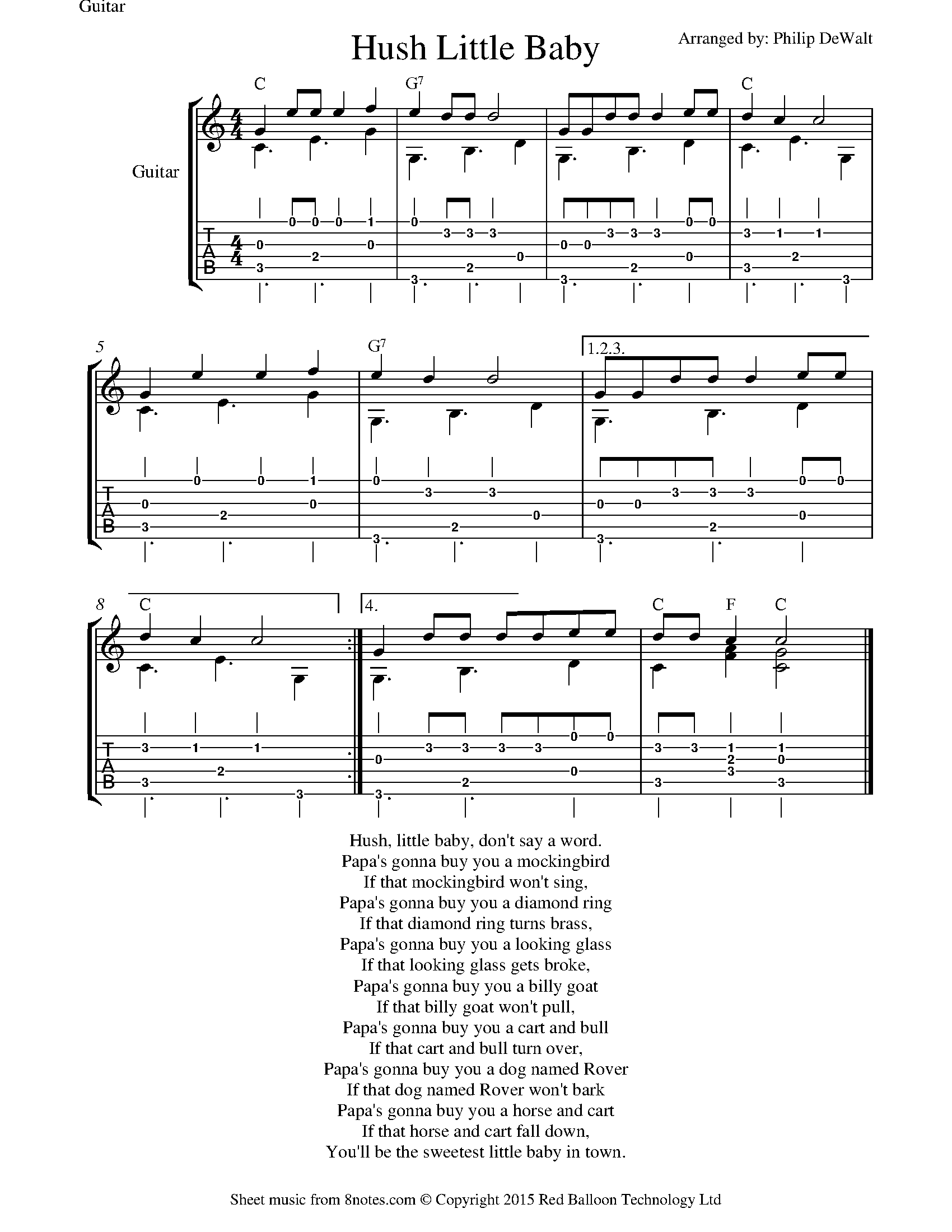 "Old Folks at Home" (also known as "Swanee River", "Swanee Ribber" [from the original lyrics] or "Suwannee River") is a minstrel song written by Stephen Foster in 1851. It is the official state song of Florida. 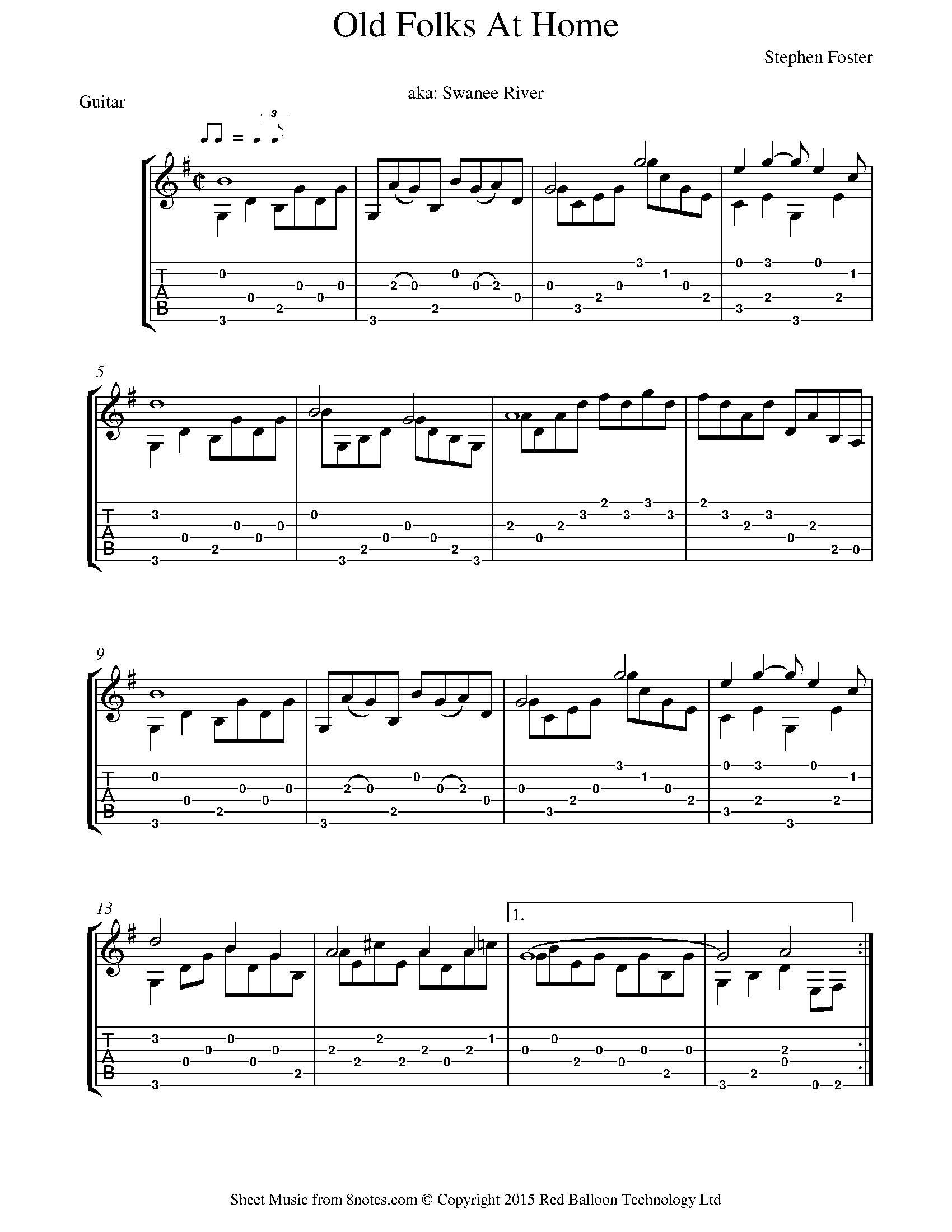 Jesse James is an American folk song about the outlaw of the same name. The song has been covered by many artists, including Woody Guthrie, Pete Seeger, The Pogues, The Ramblin' Riversiders, The Country Gentlemen, Willy DeVille, Van Morrison and Bruce Springsteen. Members of the Western Writers of America chose it as one of the Top 100 Western songs of all time. 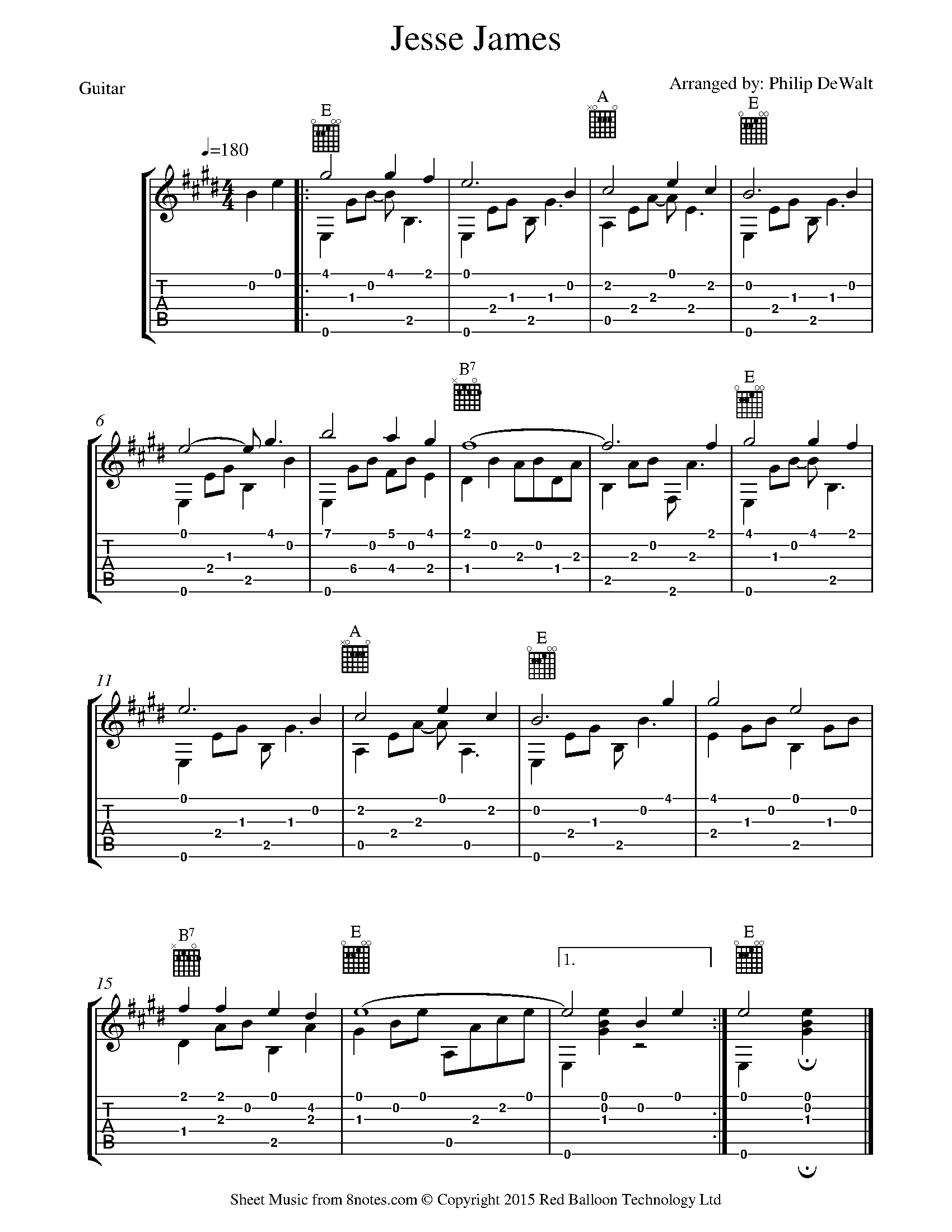 "Li'l Liza Jane", also known as "Little Liza Jane" and "Liza Jane", is a song dating back at least to the 1910s. It has become a perennial standard both as a song and an instrumental in traditional jazz, folk music, and bluegrass, and versions have repeatedly appeared in other genres including rock and roll. It is one of the standards of the New Orleans brass band tradition. 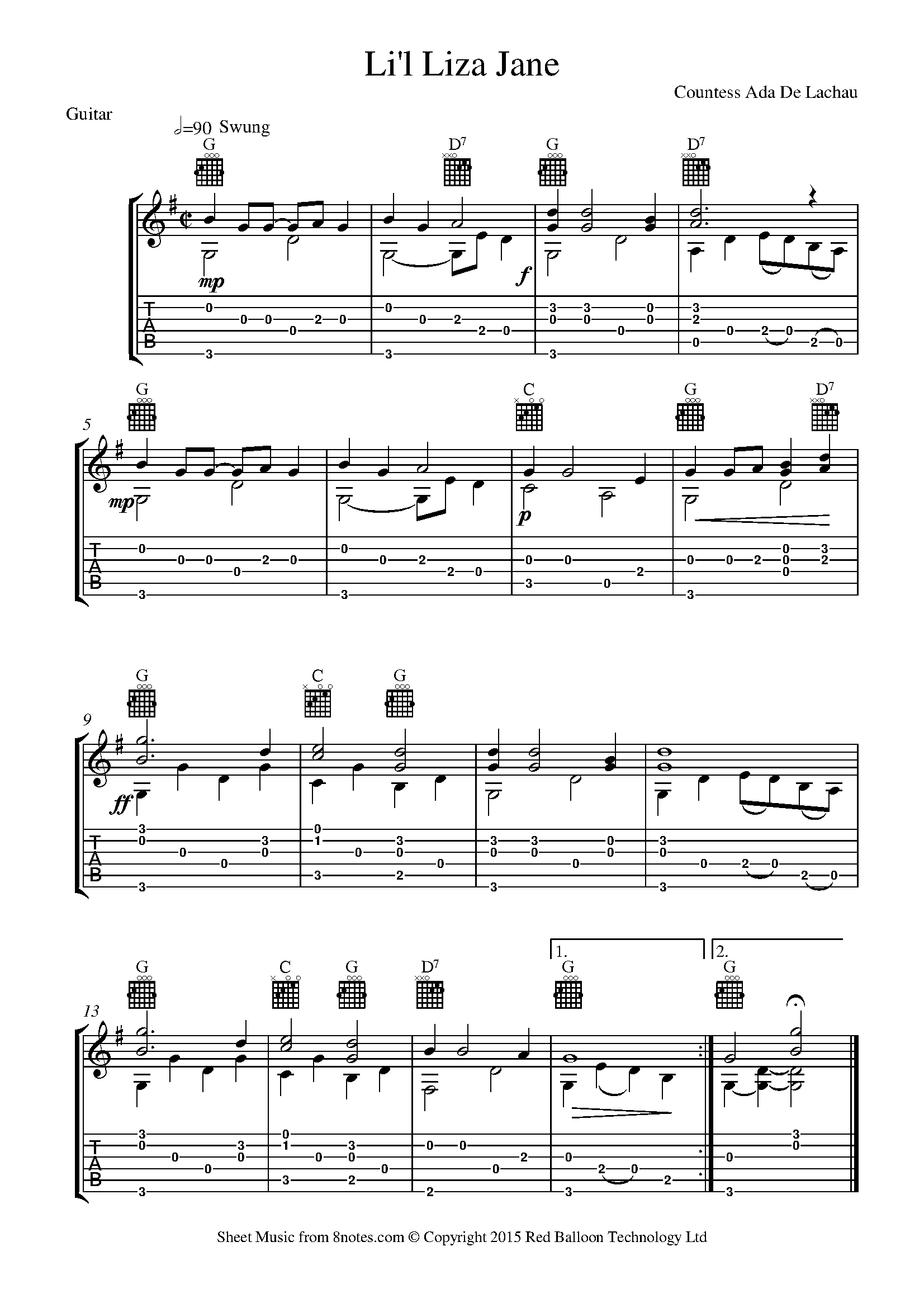 9.   Give Me That Old Time Religion

"Give Me That Old-Time Religion" is a traditional Gospel song dating from at least 1873. It was through the version published by Charles Davis Tillman the song became known amongst white musicians and audiences. It has become a standard in many Protestant hymnals and was influential in the formation of the southern gospel style. 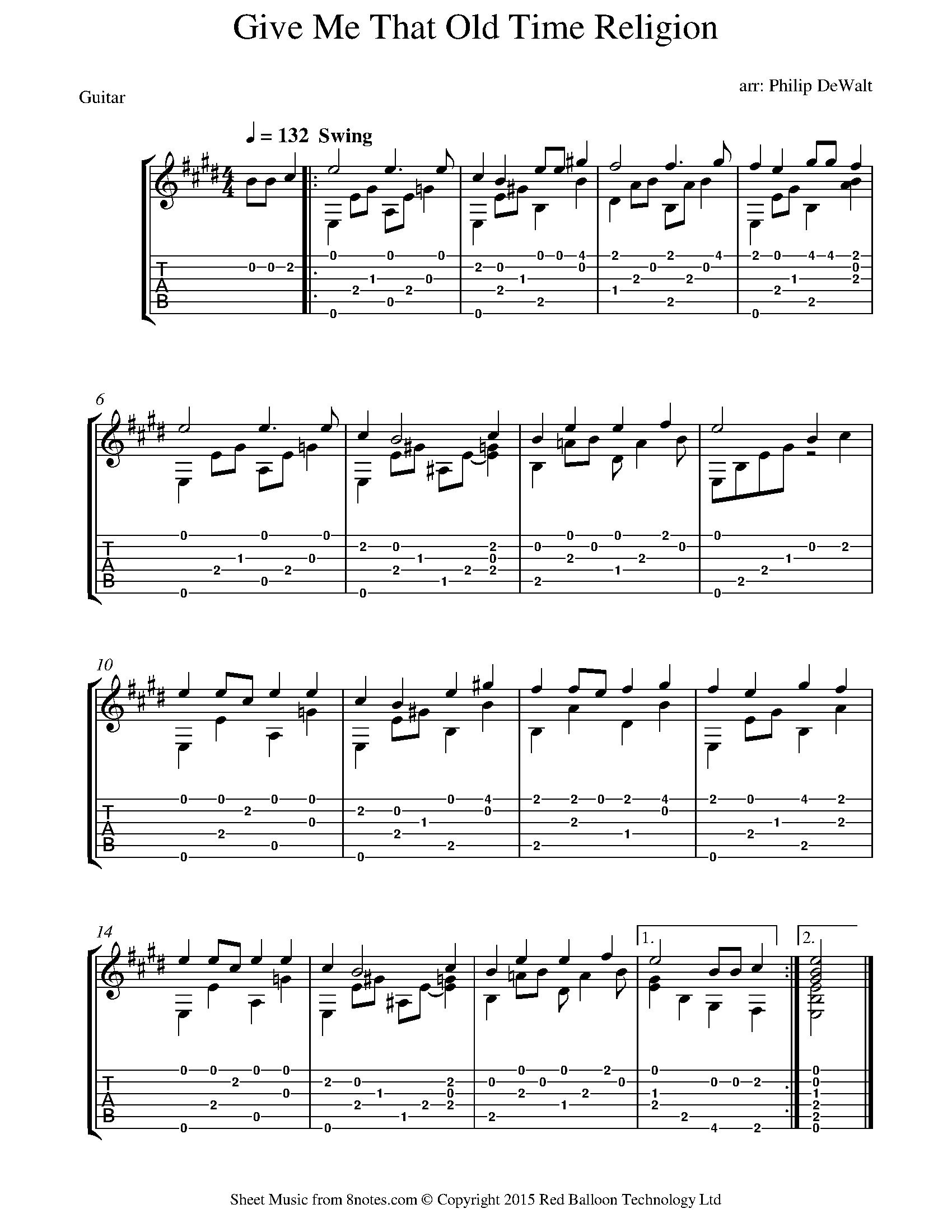 Give Me That Old Time Religion

"Molly Malone" (also known as "Cockles and Mussels" or "In Dublin's Fair City") is a popular song set in Dublin, Ireland, which has become the unofficial anthem of Dublin City. The Molly Malone statue in Grafton Street was unveiled by the then Lord Mayor of Dublin, Alderman Ben Briscoe during the 1988 Dublin Millennium celebrations, declaring 13 June as Molly Malone Day. 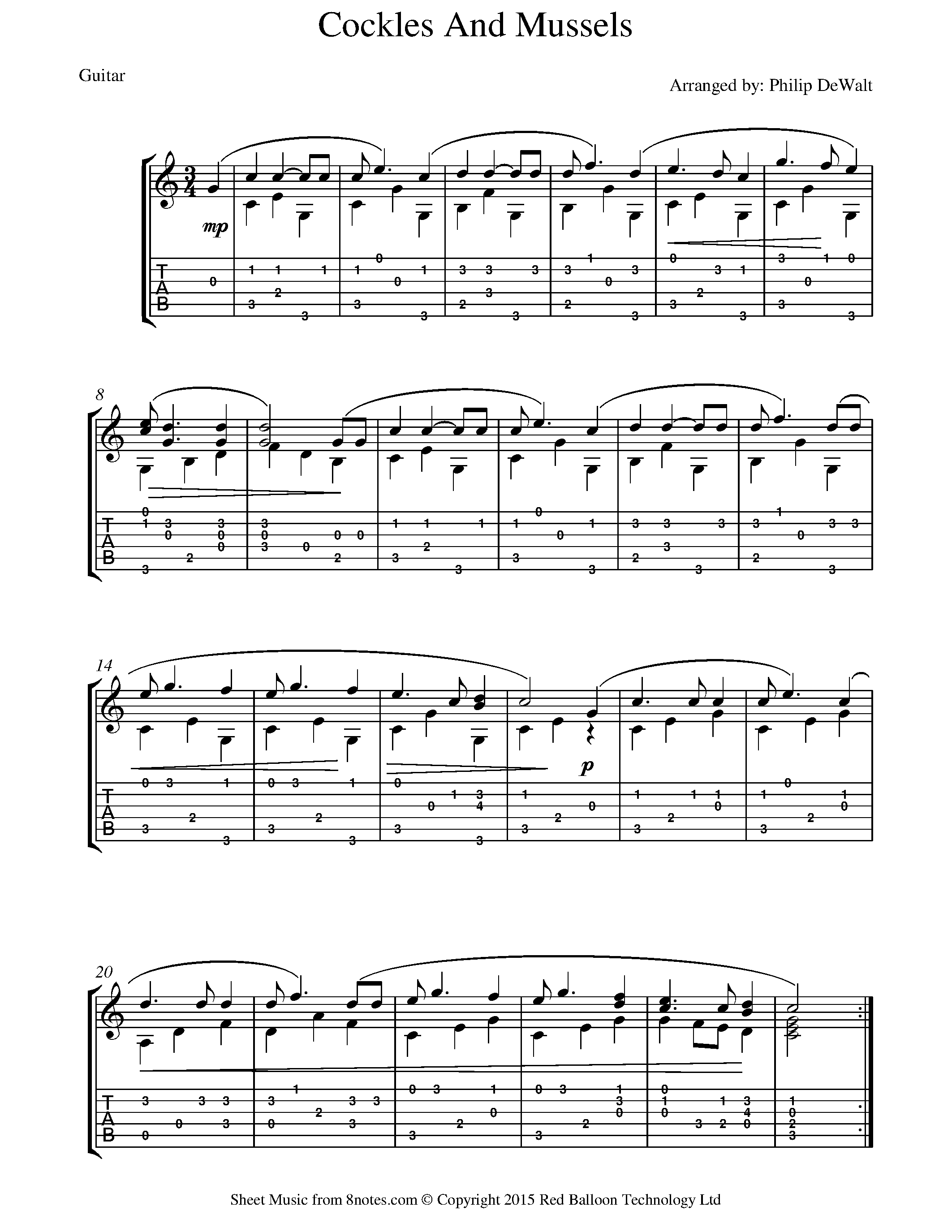 "No More Auction Block," also known as "Many Thousands Gone," is a traditional anti-slavery protest song. The melody is closely related to other protest songs such as "We Shall Overcome" and Bob Dylan - who recorded the song- acknowledged that he used the same feel in "Blowing in the Wind." 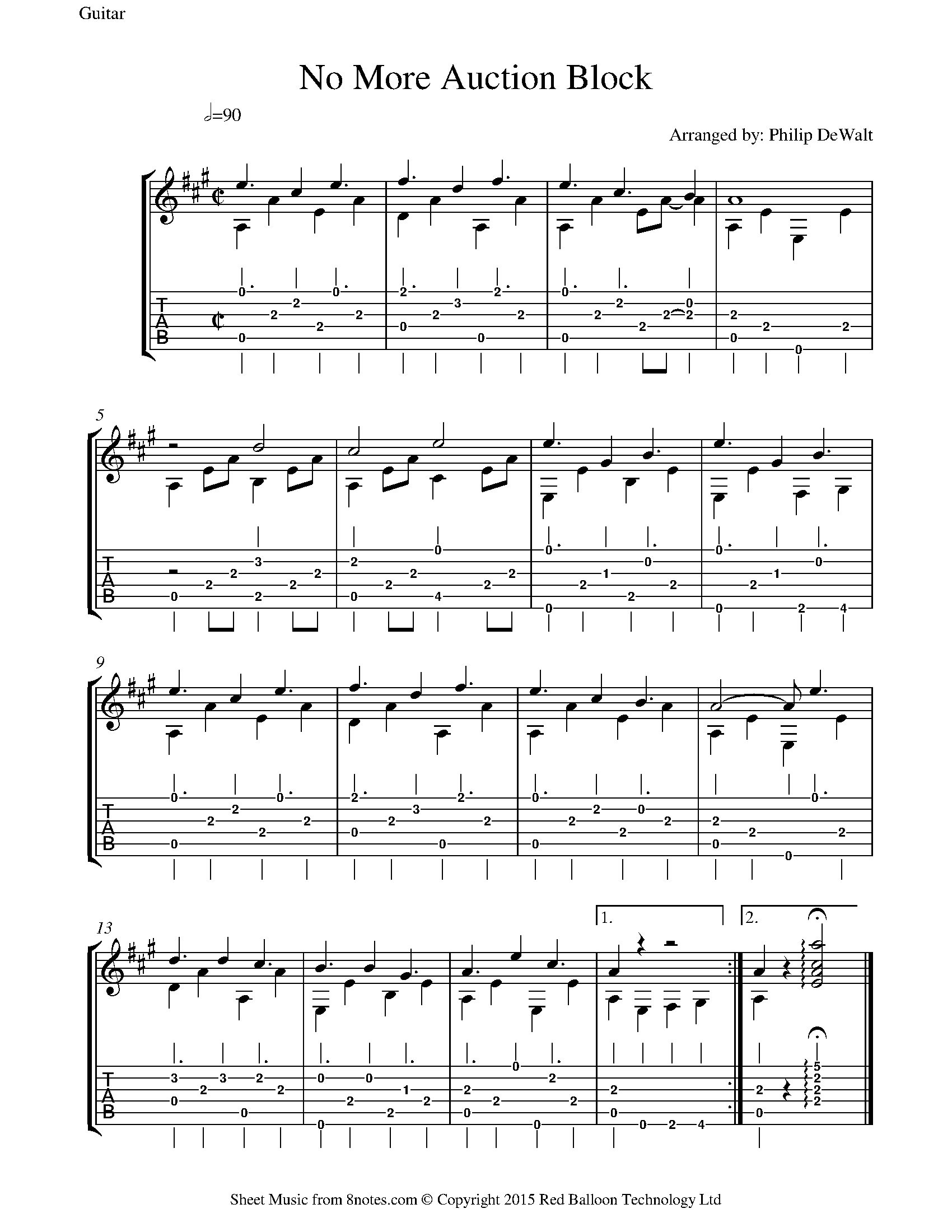 The folksong "He Stole My Tender Heart Away" was included in James Johnson's folksong collection the "Scots Musical Museum," published in 1797. One of the contributors to it was none other than Robert Burns, who, according to Johnson, added some of his own compositions to the book. 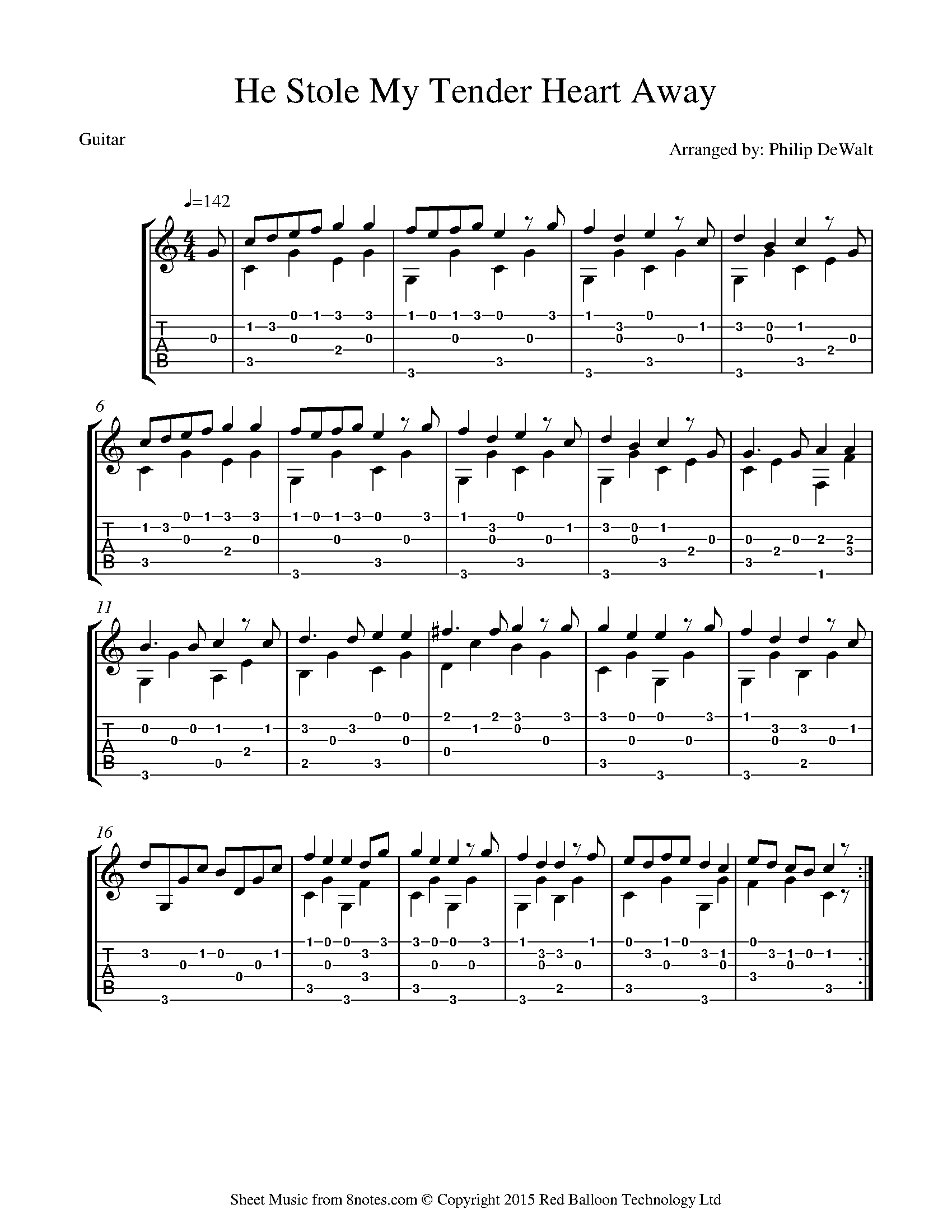 He Stole My Tender Heart Away

13.   All through the Night
(subscription) 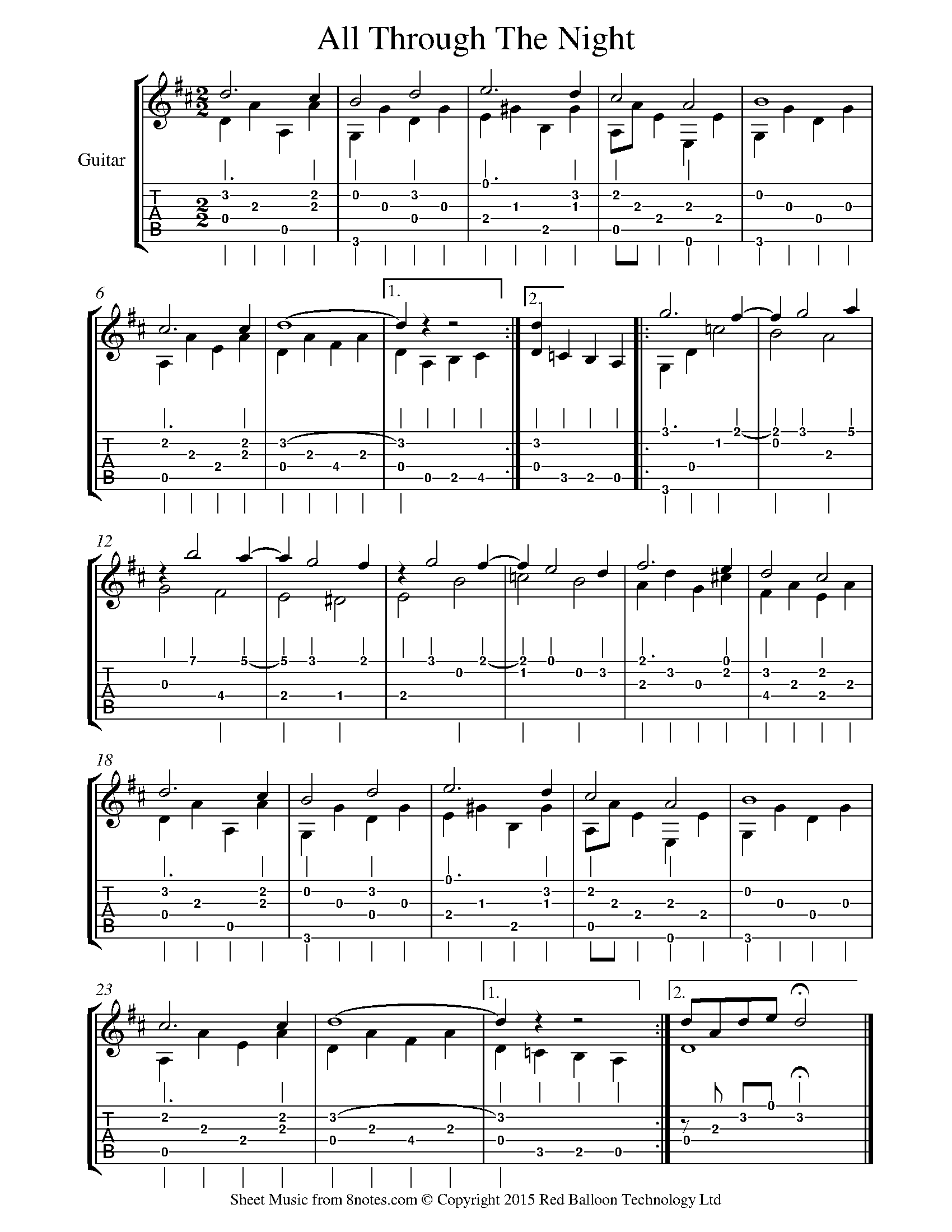 All through the Night
(subscription)