A collection of latin and tango pieces for Piano solo. Intermediate to Advanced Level

The Mexican hat dance (original title Jarabe tapatĒo) is the national dance of Mexico. It originated as a courtship dance in Guadalajara, Jalisco, during the 19th century, although its elements can be traced back to the Spanish zambra and jabber gitano. The standard music of the jarabe tapatĒo was composed by Jes·s Gonzßlez Rubio in the 19th century. However, its more common instrumental arrangement dates from the 1920s. 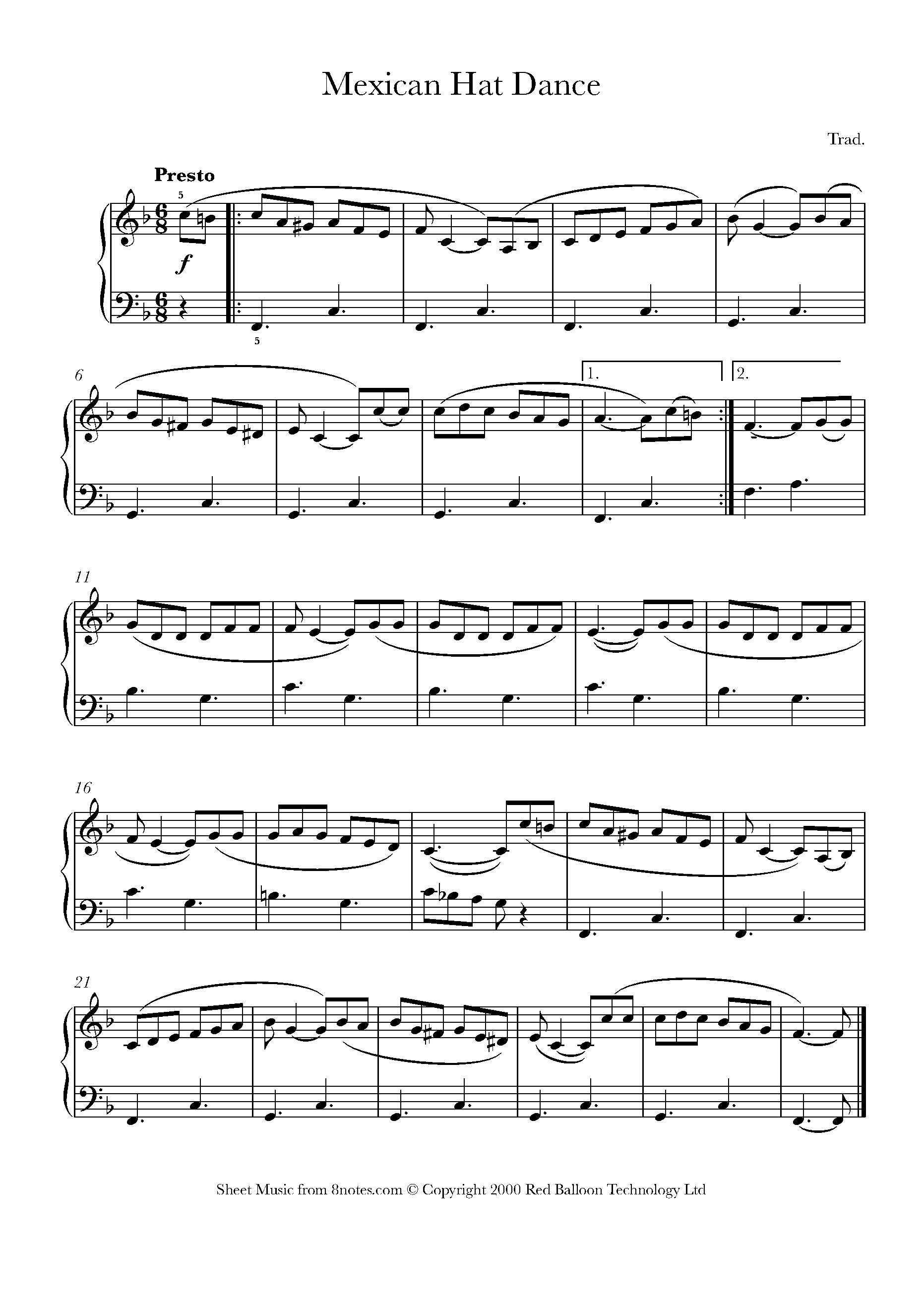 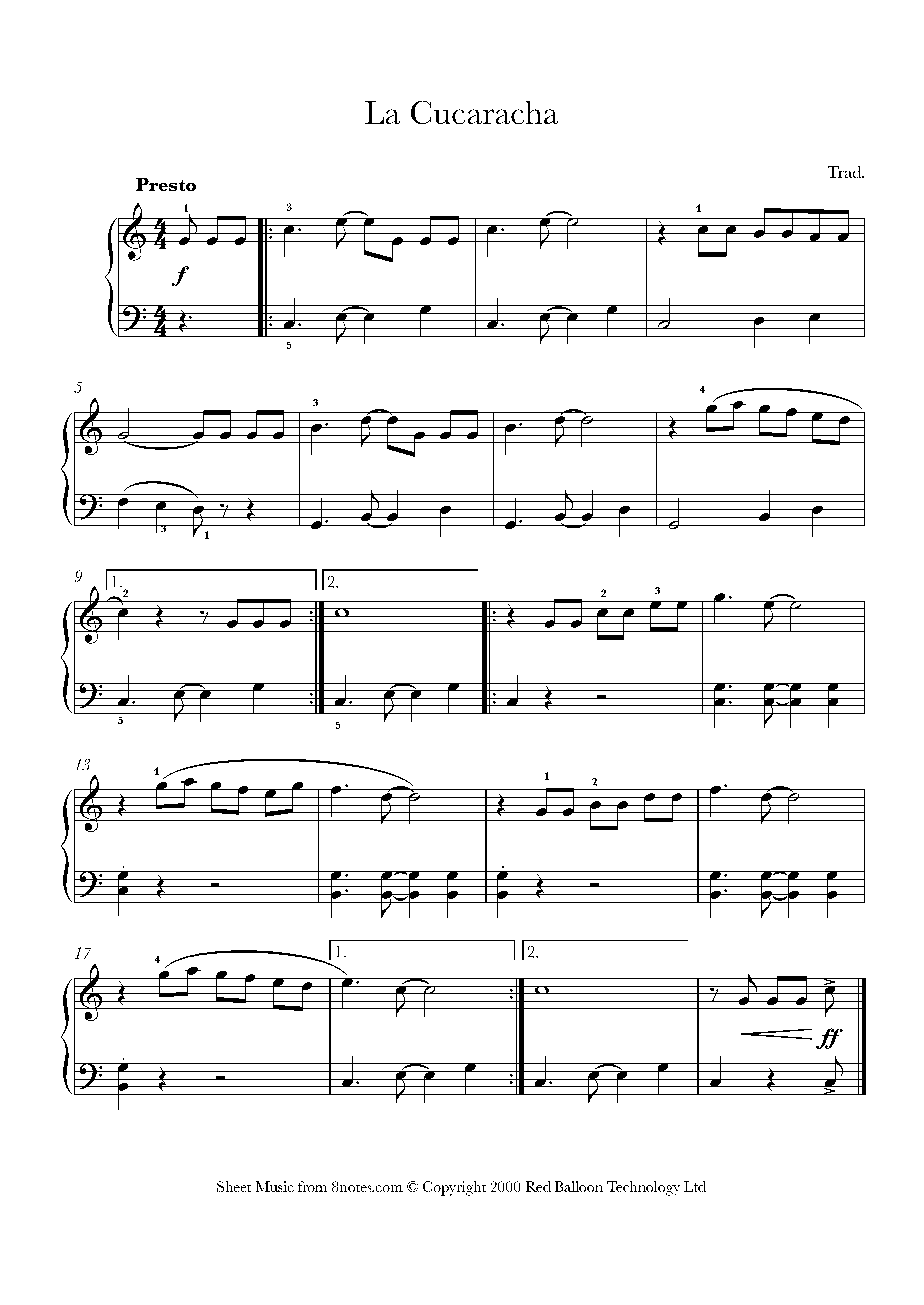 El Choclo means "The Corn Cob" and is one of the most popular tangos. It was written by ┴ngel Villoldo, an Argentine musician, apparently in honour of a nightclub owner, who was known as "El Choclo". 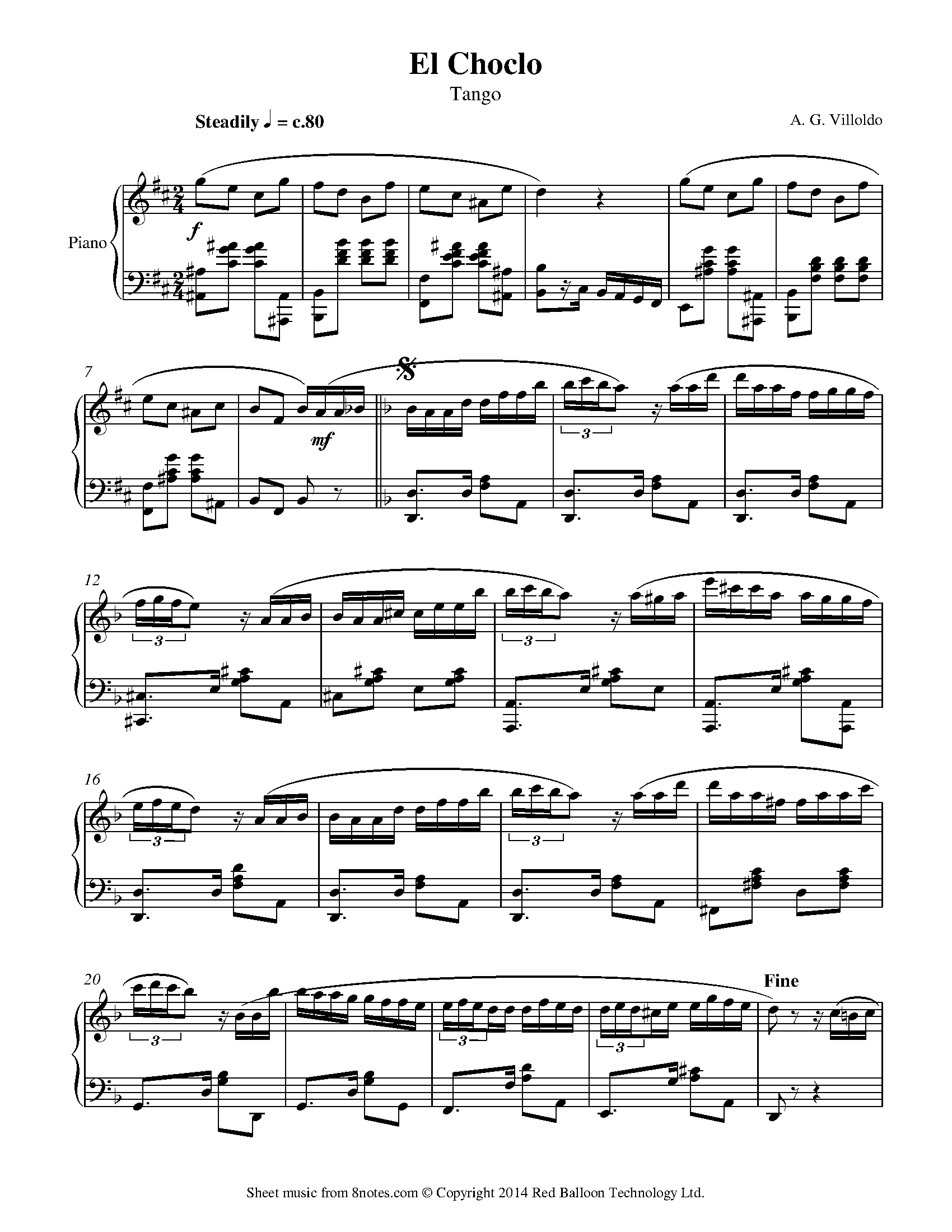 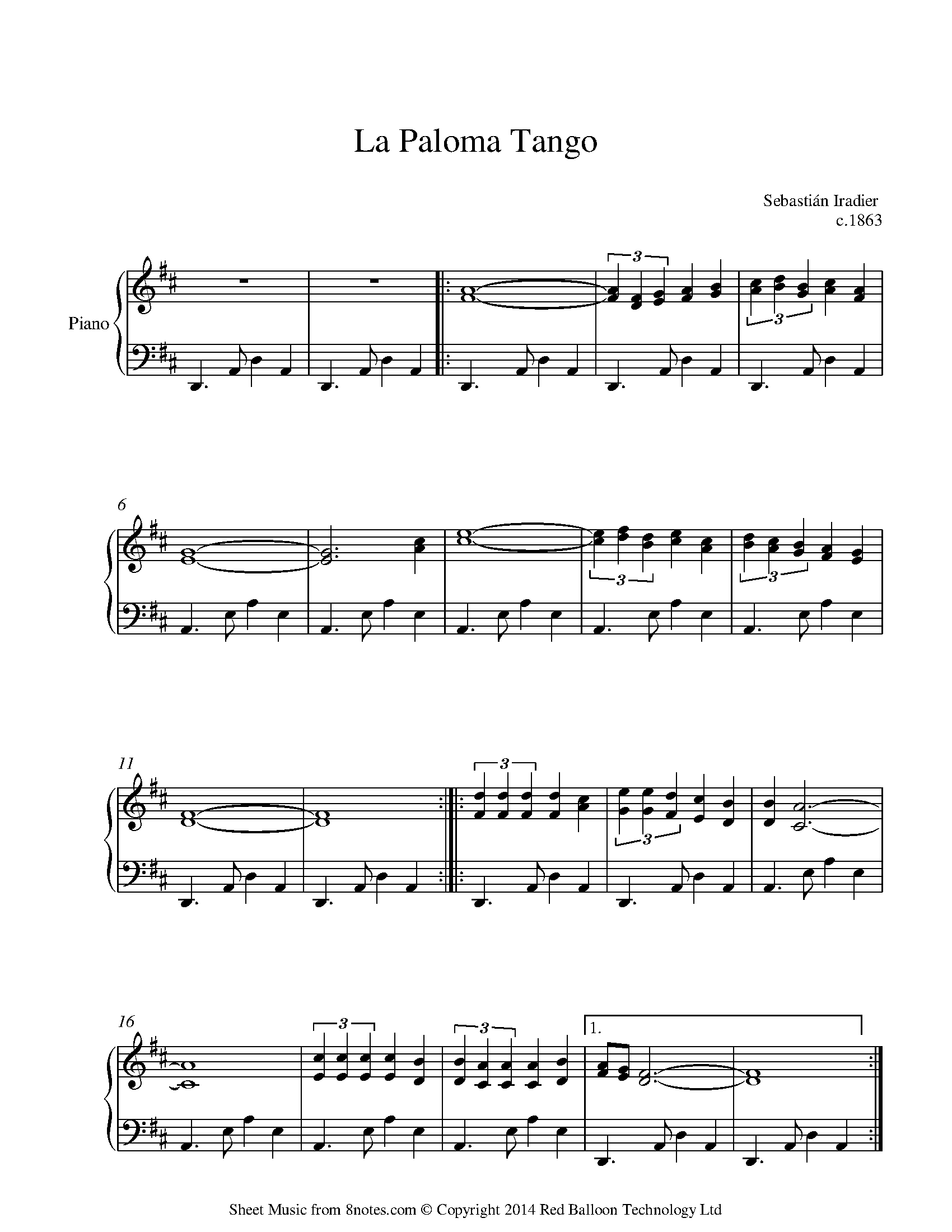 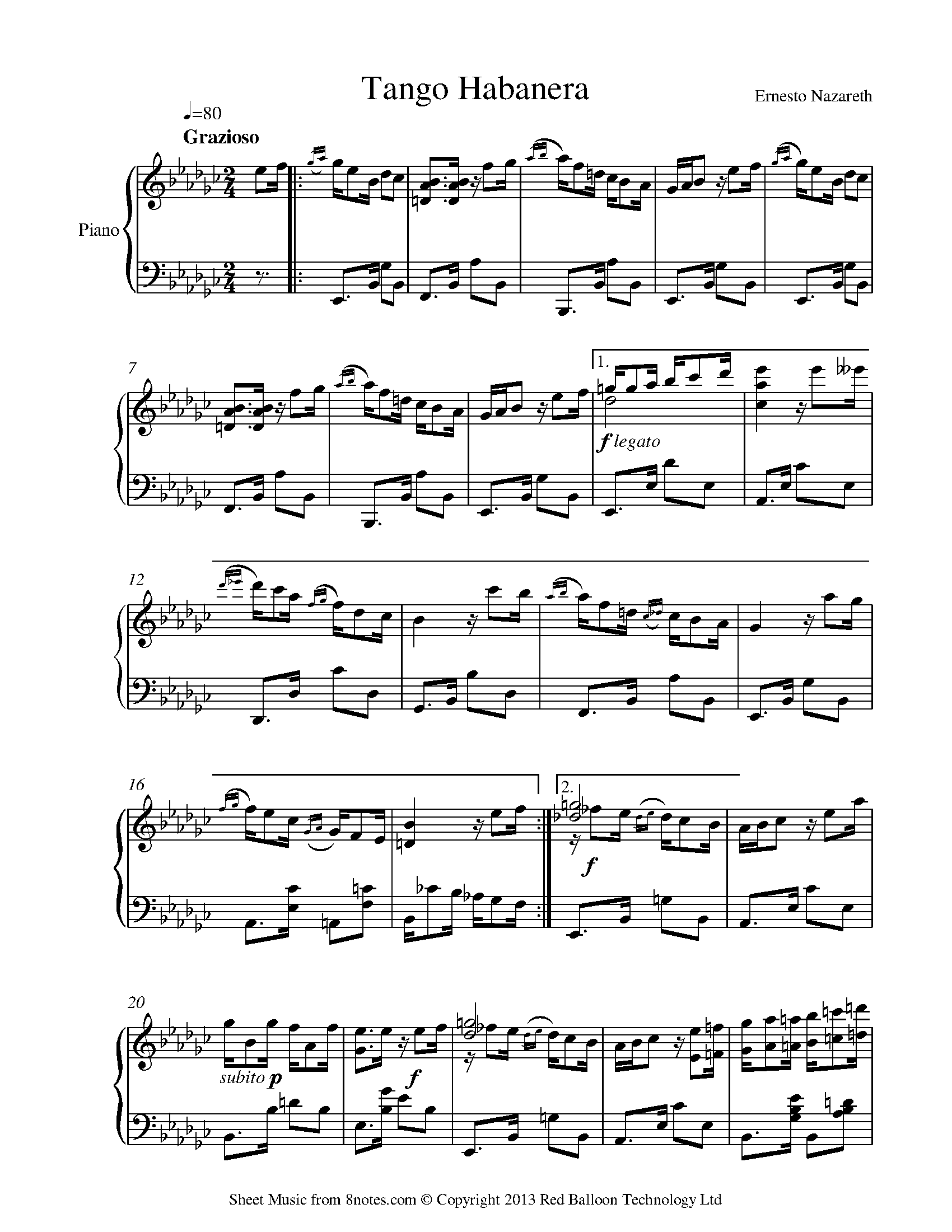 Isaac Albeniz's Espa±a, Op. 165, written in 1890 is a suite of six piano pieces that evoke various aspects of the musical and geographical makeup of Spain. Two of the movements, Capricho and Zortzico, evoke Catalonia and the Basque Country, three, including this Tango, the musical forms of the region. Though he never wrote for the guitar, some of Albķniz's works are best known in versions for that instrument, including Asturias (Leyenda), Granada, Sevilla, Cadiz, C¾rdoba, Catalu±a, Mallorca, and Tango in D. 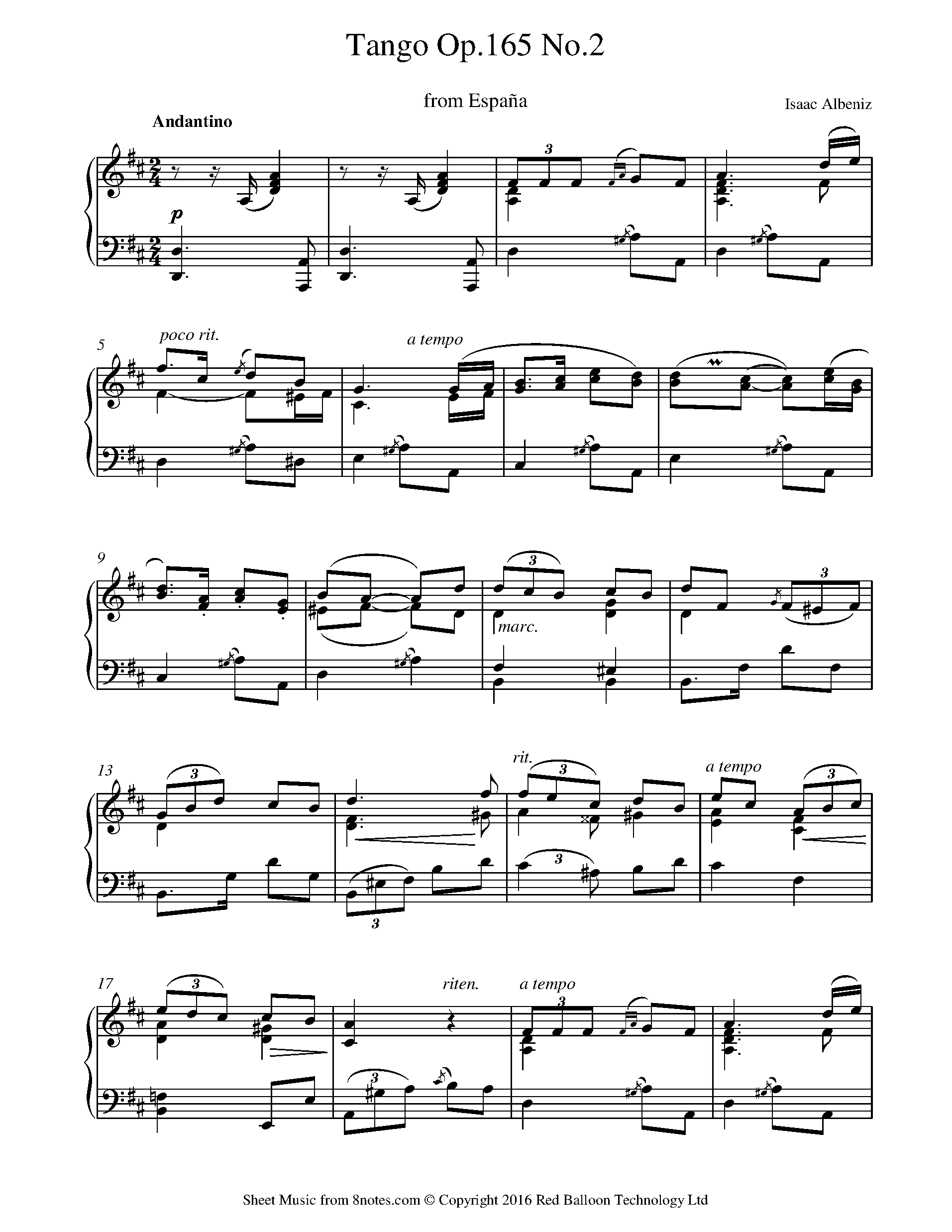 Odeon (Tango Brasileiro) was written by Ernesto Nazareth in 1910. The piece is named after the Odeon Cinema where Nazareth played the piano in the waiting room from 1920 until 1924. It is said that his playing was so popular that many attended the cinema just to hear him, without watching a movie. The piece was not well-known during his lifetime, but became popular after lyrics were added by VinĒcius de Moraes in the 1960s. 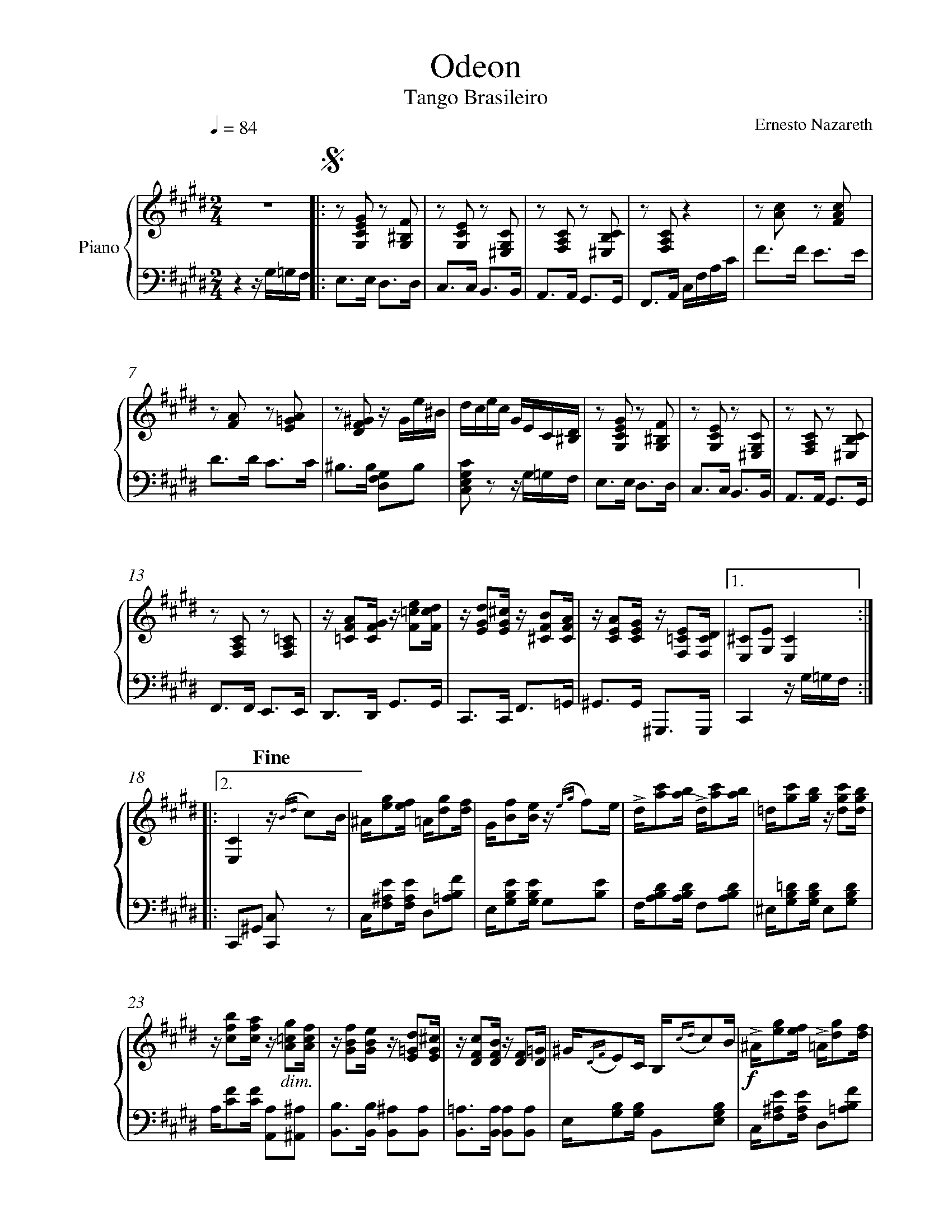 Gardel's 1927 Adios Muchachos tango was apparently inspired by an evening with friends that ended with the parting words "Adi¾s muchachos." In collaboration with Argentinian poet Cķsar Vedani he elaborated these words into a compete piece. In it the parting is more melancholicŚit consists of a dying person reminiscing about his life whilst saying goodbye to his friends. The song went on to become hugely popular, with over a hundred commercial recordings in existence. It also appears in numerous films, including "Scent of a Woman" and "The Full Monty." 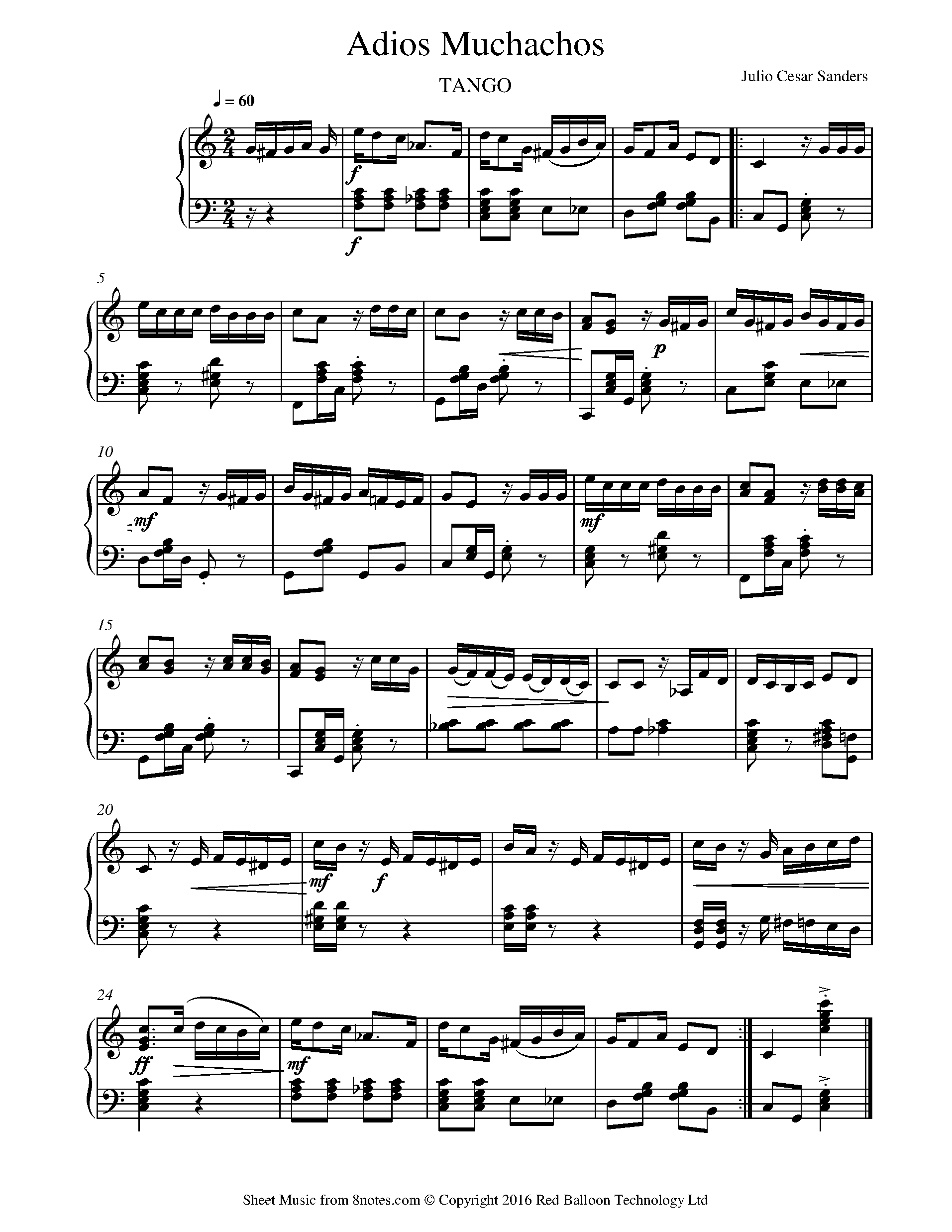 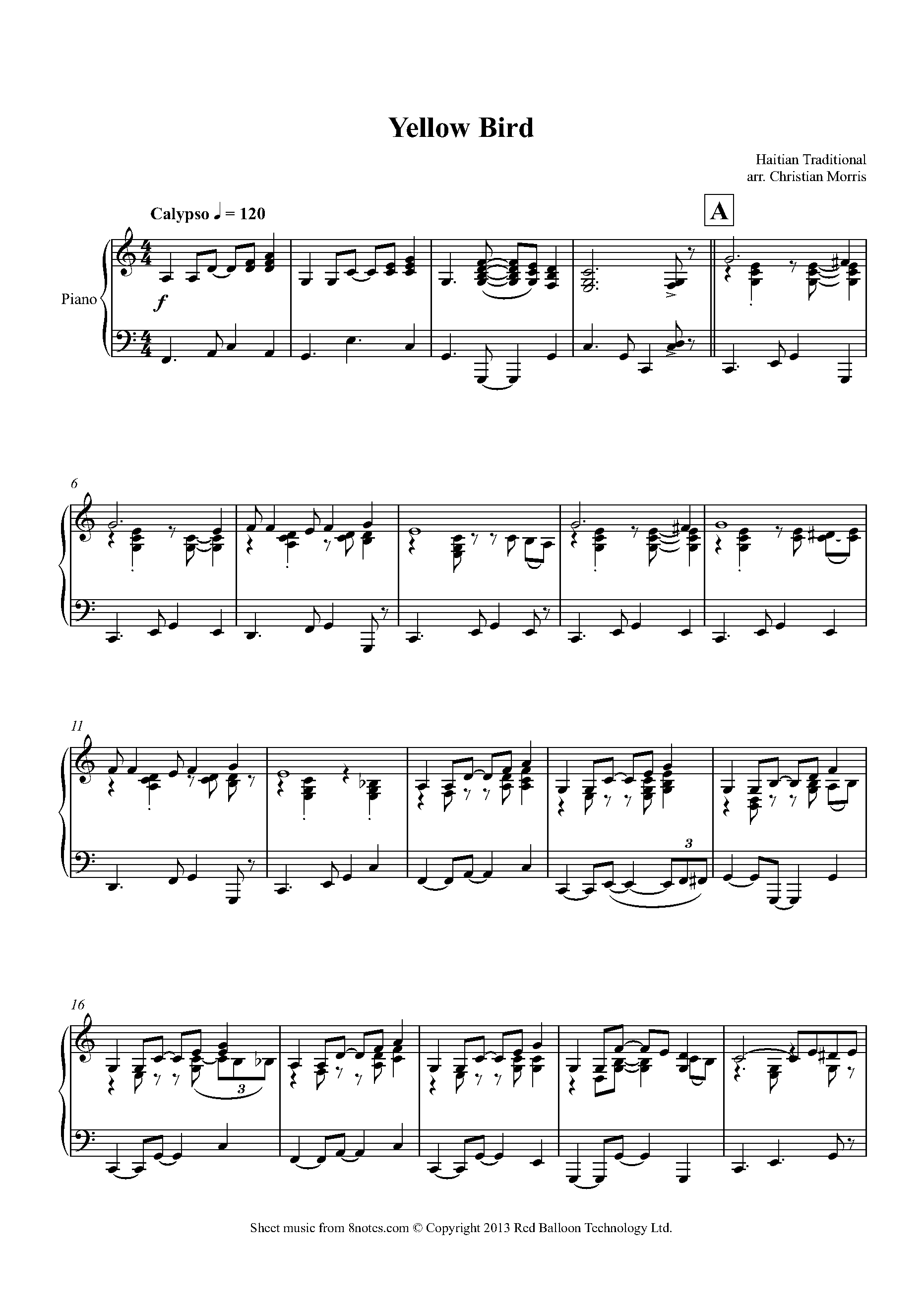 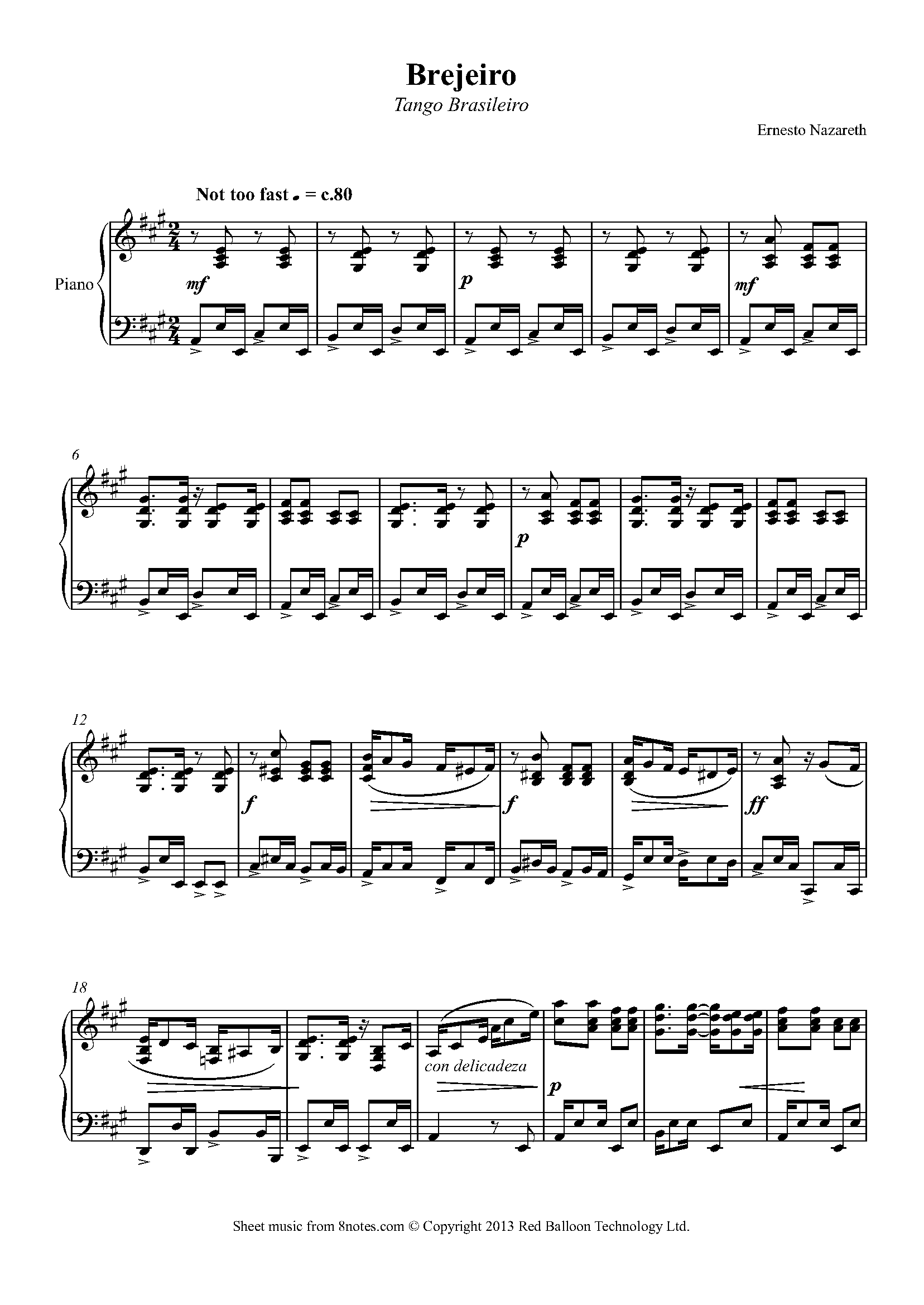 A la Gran Muneca by Argentinian composer Jesus Ventura is a tango published in 1919 with words by Miguel F. Osķs. It was first sung by Manolita Poli in the play "A la gran mu±eca." The words are written in the form of a letter from one lover to another. The song fell out of favour until Carlos Di Sarli made three recordings of it in the 1940s and 50s, turning it into the classic we know today. 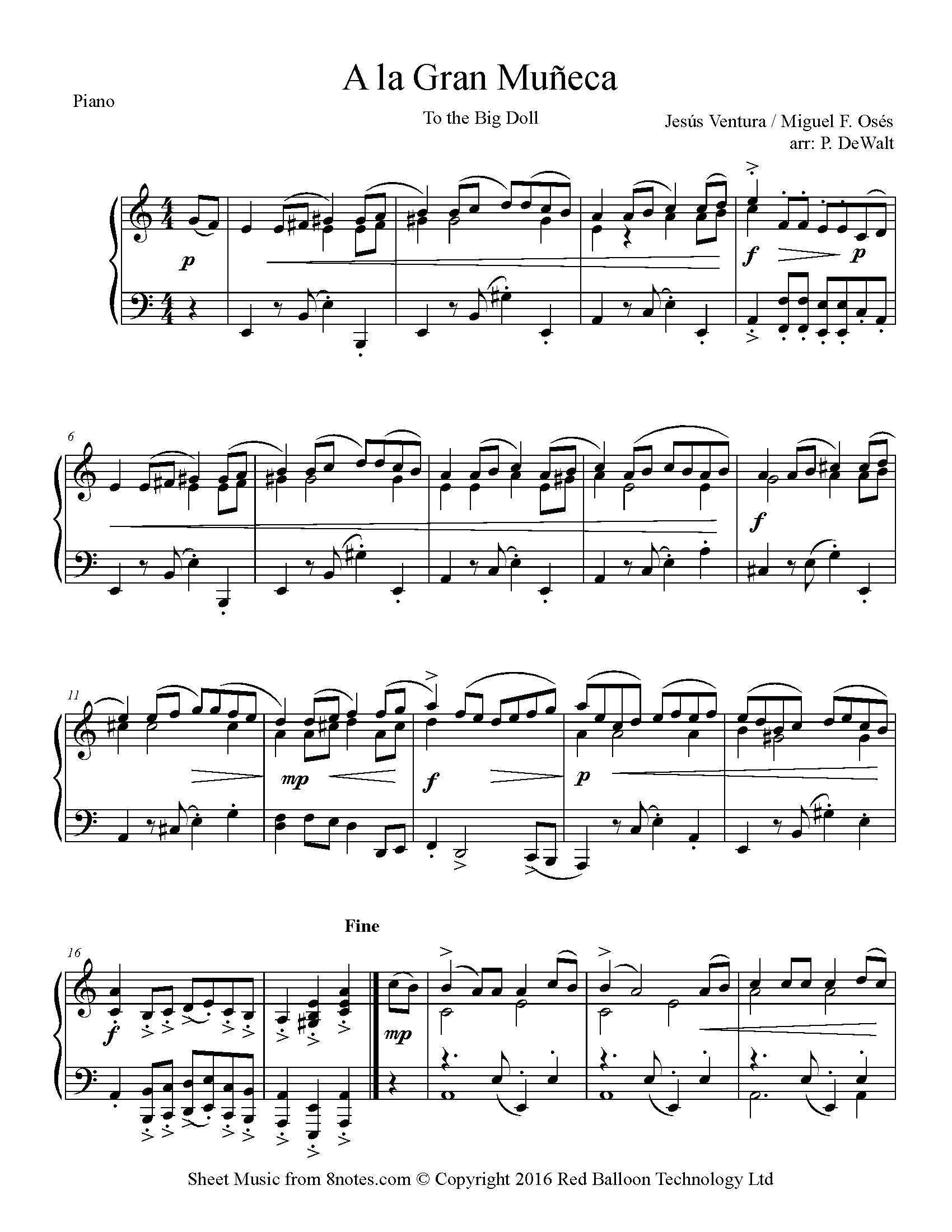 A la Gran Muneca (To the Big Doll)