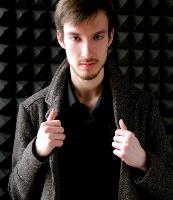 Home Page
www.richardpohl.net
No recent posts
About Me

"...and also about the excellent piano accompaniment provided by Richard Pohl. He proved his high pianistic class in solo pieces as well, especially in the 3rd movement of Beethoven´s Moonlight Sonata..." (Sona Dostalova, Orlovske noviny, January 2008)

"...and everything was perfectly complemented by the accompanist, Mr. Richard Pohl, who is doing it with such ease as they all were performing together since they were born." (Frantisek Juza, Trebic news, September 2007)

"The whole recital was exceptionally succesfull... Particularly praisworthy was his selection of the neglected "Sufferings of the Queen of France" by J. L. Dussek... In Chopin's Sonata he showed a real artistic maturity." (Vera Lejskova, Hudebni rozhledy, May 2007)

Richard Pohl (1983) was born in Ostrava (Czech Republic). His exceptional talent resulted in many awards at national competitions for young musicians including Honorary Diploma and First Prize at the Carl Ditters von Dittersdorf Chamber Music Competition, Honorary mention at the International Broadcast Competition Concertino Praga and many awards for the outstanding piano accompaniment during his studies at State Conservatory in Brno and later at the Janacek Academy of Music and Performing Arts.At the academy he studied with Zdenek Hnat, one of the greatest Czech pianists of our time, a pupil of Heinrich Neuhaus. After his retirement in 2006 Pohl entered class of celebrated professors Alena Vlasakova and Jan Jirasky; now he is getting his Master Diploma under guidance of professor Jan Jirasky only. He also attended masterclasses with Antonin Kubalek (Canada), Jan Gottlieb Jiracek (Austria), Stefan Vladar, Sontraud Speidel, Thomas Steinhöfel, Iva Navratova (Germany), George Kanev (Bulgaria), Petr Sefl and Ivo Kahanek (Czech Republic).

Since 2003, he's been regular participant of the International Kubalek Piano Courses where in 2004 he received a special prize for the best performance of a piece by a Czech composer and in 2006 for the best performance of a Mozart piece. He's been awarded with full scholarship for the International Sommerakademie Prag-Wien-Budapest 2006 and invited to perform at the opening concert of that festival. There he also took part in an orchestral workshop focusing on interpretation of Mozartian concerto (with Stefan Vladar and Vladimir Kiradiev). His Bachelor thesis on that topic was awarded by the highest possible rank of 100 points during the defense process.

Pohl's main interest is the chamber music, especially his collaborations with singers. In 2002 he established a partnership with one of the most talented singers of his country, the bass-baritone Josef Skarka. They created a duo focusing on performing art songs, and together took part in such events like the International Music Festival Moravian Autumn, the International Nadia and Lili Boulanger Competition in Paris, The Days of Young Performers, Bravo Mozart and many others. In 2004 he took part in several events of the national cultural project Czech Music 2004. They were also invited to perform at various festivals abroad (Montenegro, Italy, Mexico). Richard is also collaborating with many important ensembles, like Sinfonia Chamber Orchestra or Matl Academic Choir.As an excellent accompanist, Richard Pohl earned many prizes and awards in that field. He was also appointed as an official accompanist of voice, strings and winds department at Frantisek Jilek Music School in Brno. He collaborated with many respected artists (J. Dvorsky, M. Zhang, J. Pustina, E. Weissova, R. Fujii, J. Dolezilkova...).

He records both solo and as an accompanist on CD's and for broadcast. Pohl is proud to present his live recordings at the Piano Society, appreciating the idea of the site as a source of sharing the classical piano recordings by pianistic community from the entire world.

His artistic projects are supported by the J Art Agency and Ing. Cyril Svozil (Fenix Trading).

To find more about this artist, please visit following links: