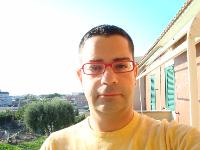 No recent posts
No sheet music recently viewed
About Me

Alessandro started to sing as a child, at 7 years old joined the "voci bianche" of the well known "Filarmonica Romana" Academy (linked with the Vatican) to be classically trained. In his fourtheenth a close friend introduced him to rock, he started to take guitar bass lessons to switch back to voice in his seventheenth. He then started to sing with many bands from blues to rock and in the meanwhile being a player of choirs from classical to gospel. In his twenties he became the lead singer of a band called Assioma with instruments players of the University of Music of Rome. Moved to London in 1998, he then felt in love with acid jazz, moving his interests in djing as well, he played a few jam session performing as a singer and dj in pubs and bars while working and studying english. Back to Italy in 2001 he then worked as a singer and dj in cruiseships and tourism resorts, where as well he started to play as cabaret act for 6 years. Now is building his one man show.