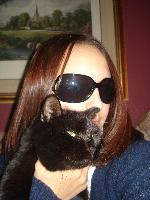 Undefeated...until Cavalcade... in which we got 5th place! We Rock!!!1~CoUrT~

Hi my name is Court. I <3 band and choir soooo much.so many funny things happen 2 us especially our band.u might know my friend bandgeekluver.band camp was totally awesome, but it was so hot outside. a couple of people collapsed while running through the show cause of it...scary.we had a lot of fun. i was fought over the whole week at camp by the mellophones and the low brass it was quite hysterical.our band is really wacky but were all one big family united by one cause...to make it through the season w/o going completely insane!lol

our show this season is jekyll and hyde.
Interests

jekyll and hyde
this isnt my school but it is the show we r doin this year.

pokemon
me and another boy(hes on drumline) sang this song to annoy the other band people.


the donkey kicking trumpets present the mysterious ticking noice!
the trumpets did this as part of their performance at band camp this year.it was so funny.