Practical Introduction to Changing Position on the Cello - 8notes.com

Practical Introduction to Changing Position on the Cello 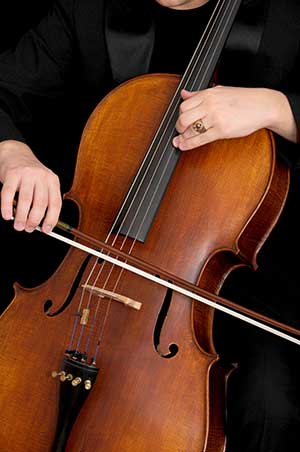 Once you've mastered playing cello in first position, you'll soon find the need to move to higher positions. Let's go over the most common reasons you will need to change position on the cello:

1.
The most common situation is where you wish to play higher than the note D (4th finger) on the A string. The only way to access the register above this is by shifting the left hand to a higher position.


3.
Vibrato may be weak when played with the fourth finger. A possible solution is therefore to shift position to allow the use of a stronger finger. For example, the note D on the A string will be played by the 4th finger in 1st position, but, by moving the have to the 3rd position, you will be able to play it on the much stronger 1st finger.

4.
You may wish to create a different type of sound. Each string of the instrument has a different characteristic so, for example, playing a melody entirely on the C string, even when it goes above first position on that string, will help to give the melody a richer quality than if it had also used the thinner G string. Sometimes composers even specify in their scores that a melody should be played on a particular string by the use of roman numerals (IV for C, III for G, II for D and I for A).


5.
Changing position may reduce the technical demands of a given passage.

a)
Crossing strings.
Imagine a situation, for example, where you have to play an Bb on the A string followed by a C on the G string. This can be problematic since there is a good chance than when you do so, you may accidentally hit the D string when crossing strings. If, however, you play the Bb on the D string, there will be no danger of this happening.

A good way to practise finding both second and third positions is to use the opening of two famous melodies: Chopin's Funeral March, And Mendelssohn's Wedding March, better known as Here Comes the Bride.

Here is the opening of this famous tune:

We are going to concentrate only on the first five of these notes, until the pitch changes to Eb.

Try playing the following on the C string.

The final note Eb, played with the second finger becomes the position of the first finger in second position. In this higher position you can also try to play the melody at this new pitch, though notice that the upper note is now played on fourth finger.

You may repeat the same melody on the G string:

and on the D string:

and on the A string

Play the opening notes of the melody on the C string in first position.

This time the higher note, F, played with the fourth finger is the location of the first finger in third position. Because notes are closer together in higher positions and also because we used an open string in first position, we cannot play the opening of Here Comes the Bride in the new position. You can, however, play the opening of the Funeral March (see Second Position, above). Try it:

You may also try the same on the G, D and A strings:

It's quite common to learn this position before second and third, because it is easy to find. If you rest the thumb in the crook, i.e. where the underside of the fingerboard meets the body of the instrument, the first finger it placed above the thumb, or perhaps slightly behind it:

1.
Think ahead, physically and musically:


a)
Physically because the hand should lean towards the new position before moving. This creates momentum. If you are not prepared the movement will be too sudden and jerky.


b)
Musically because you need to try to imagine the pitch of the new note and how you will play it before getting there. If you do not do this you will find yourself correcting the pitch and/or adjusting dynamics/vibrato etc. too late.


2.
The hand leads but the whole arm moves. In this sense the hand starts the movement but the arm carries the hand to the new destination. A common fault that prevents this happening smoothly is for the thumb to be gripping the neck too hard, which can result in it being left behind - it must move smoothly with the whole hand.


3.
No sliding...The finger that is on the string will slide up or down to the new position without leaving the string (otherwise you will produce an open string sound). However, to avoid a sliding sound the finger does not press down on the fingerboard, instead just sitting on the string. It only presses down when you have reached the new note. As you become more advanced you will realise that there are situations where a slide is desirable, but the first step is always to master the position change without it.