Piano Piano lessons An introduction to Reading Lead Sheets on the Piano or Keyboard - 8notes.com

An introduction to Reading Lead Sheets on the Piano or Keyboard

You may have come across some sheet music that has symbols written above the stave like this (circled in red):

(View all of this, 'Arirang' piece here)
These are chord symbols. A chord is two or more notes played at the same time. In the case of this piece of it possible to ignore the symbols, since the music is anyway written out fully for both hands.

There is a way of notating music, however, where only the melody and chords symbols are written down. It is as if someone 'forgot' to write the left hand: 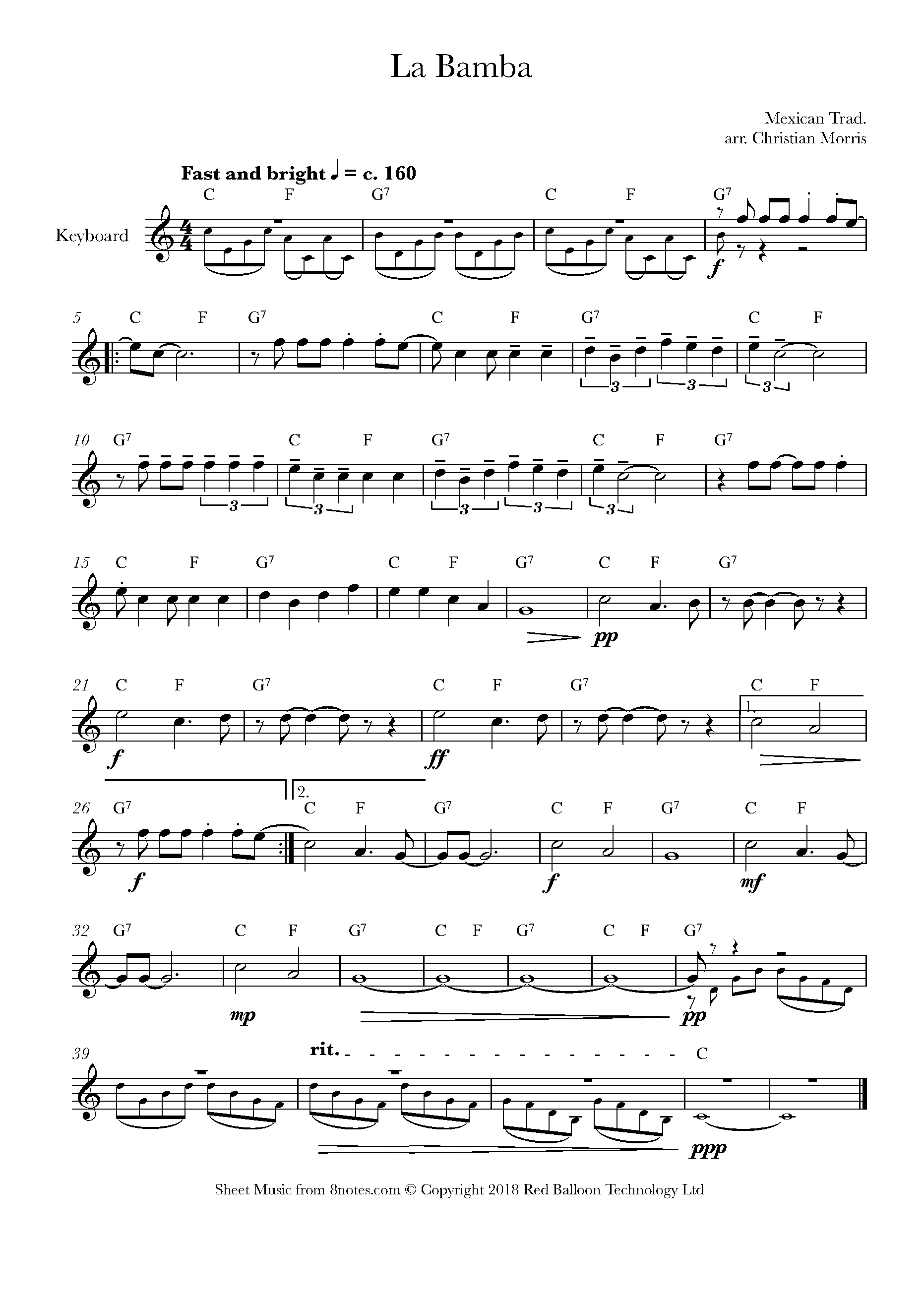 
This is called a 'lead sheet '. It is a way of writing music that is especially common on guitar, but also widely used for keyboard instruments. In fact, 8notes has an entire section dedicated to this type of notation.

So how do I read these chords?

Let's take a very simple piece, London Bridge, which has just two chords, C and G. Ignoring the chord symbols for now, play the melody with your right hand. 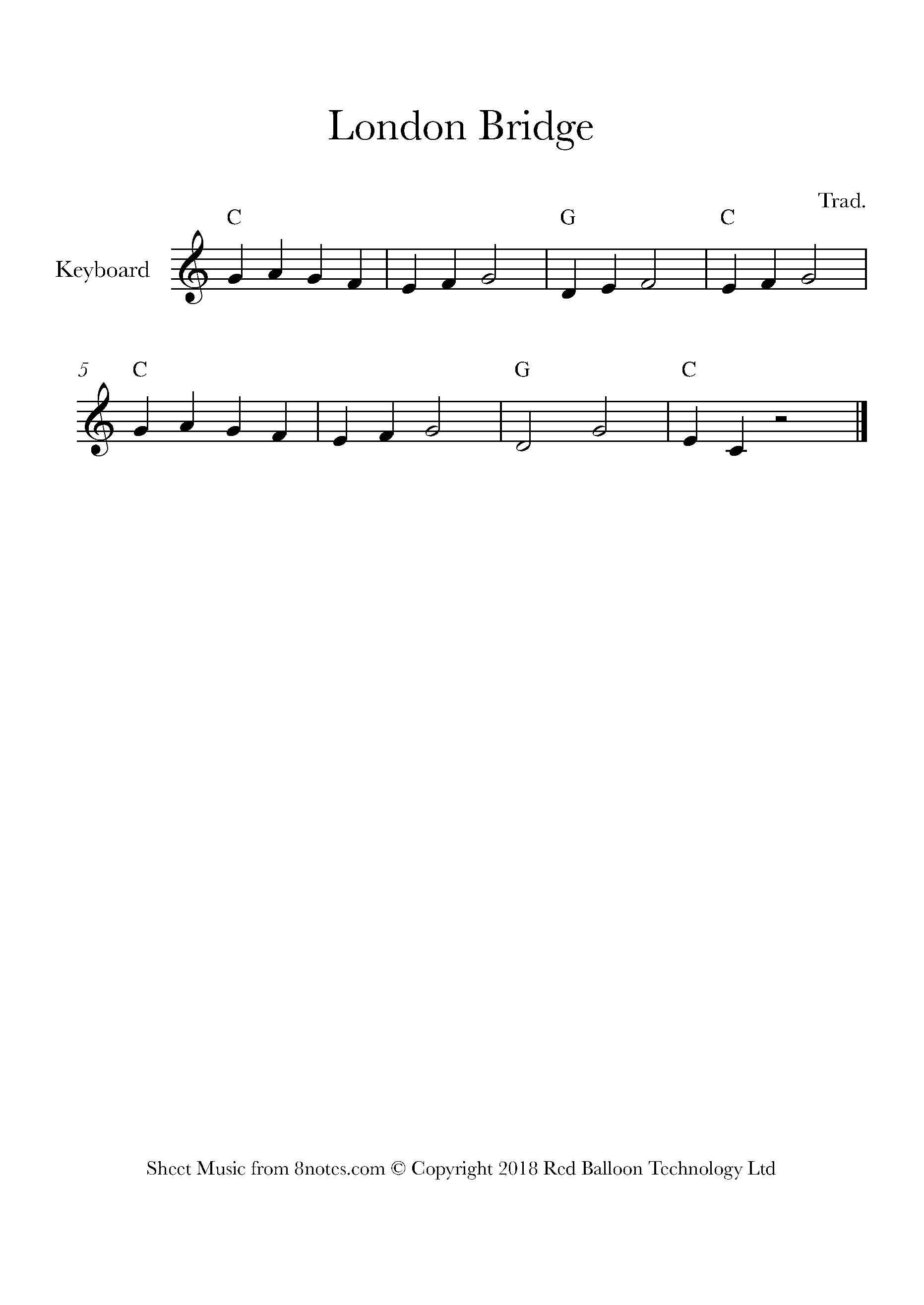 London Bridge is Falling Down


Now, let's take a look at those chords. Where you see a chord with just the name of a note (e.g. in this case C and G but it may also single notes with sharps or flats, such as C#, G#, Bb, Eb) this is a 'major' chord.

The lucky thing is that every major chord has exactly the same pattern on a keyboard. Let's take one of the chords from London Bridge, the chord of 'C'. The bottom note is easy to find because it is name of the chord i.e. 'C'. Except is some specific situations, this is always the case with chord symbols.

There are two ways of finding the other notes in the chord. One involves knowing your key signatures and counting spaces between notes in a chord diatonically (i.e. within that key signature).

However, we will assume no prior knowledge. So, in the case of our chord of 'C', in order to find the other notes in a major chord you must count up four notes from the 'C' to the note 'E' and from there a further three notes to find the note G. Remember, when counting the notes you must include the black notes:

Now we can play the first part of our tune with a chord:

Note that the player repeats the chord in the second bar, even though it is not written there. That is because the chord symbol tells you only how long the chord lasts for, not how often to play it. In practice you may actually play it as many times as you like during the bars in which it is 'active'. In fact, as you learn you will become even more creative, with chords being turned into melodic patterns in their own right. For now, however, let's keep things simple!

Now let's form the second chord of our tune, that of G. This is exactly the same process as for 'C'. We find the first note 'G', count up four notes to B, then three notes to 'D':

It is worth at this stage noticing how the hand position is the same for both chords. Once you have this hand position worked out, the fingers don't need to move at all. Instead the whole hand moves between the two chords. Try practising the two chords without the melody:

And now put the melody and chords together:

Remember also to practise the piece with just the melody and chord symbols - once you're confident they are the only things you should need:

London Bridge is Falling Down

When practising putting chords and melody together it may help if you start off by playing just the bottom note of each chord in your left hand. Then play with two notes and finally with the complete chord. If you have an electric keyboard there is a good chance it will be able to generate backing tracks. If you play the chords correctly in your left hand the keyboard will usually be able to generate an accompaniment that fits harmonically with the melody in your right hand. It will also make you sound like a real pro!

You may be wondering why music that already has both hands fully notated often also has chord symbols. There are several reasons for this:

To allow other instrumentalists to join in. This type of notation is especially favoured by guitarists, as said. A piece of music with as much information as possible is very adaptable. As an aid when improvising. Sometimes an instrumentalist will develop the piece further by not playing exactly what is on the page. The chord symbols allow the player to stay in the correct harmonic area whilst doing this. To make the piece easier to play. It may seem harder to read the chord symbols but, actually, once you've got the basics, you can make a piece sound 'complete' even whilst keeping your left hand quite simple. This can be useful alternative if the written-out part is too difficult to play.

Now go on to Lesson 2