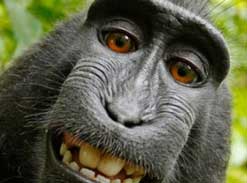 
A collection of humorous pieces for French Horn in F in with piano accompaniment. Easy to Advanced Level

"Entry of the Gladiators" is a military march composed in 1897 by the Czech composer Julius Fučík. He originally titled it "Grande Marche Chromatique," reflecting the use of chromatic scales throughout the piece, but changed the title based on his personal interest in the Roman Empire.

In 1910 Canadian composer Louis-Philippe Laurendeau arranged "Entrance of the Gladiators" for a small band under the title "Thunder and Blazes" and sold this version throughout North America. It was during this period that the song gained lasting popularity as a screamer march for circuses, often used to introduce clowns. Today it is known mainly by this association, even though the title and composer are relatively obscure. Laurendeau's version was also transcribed for fairground organs. 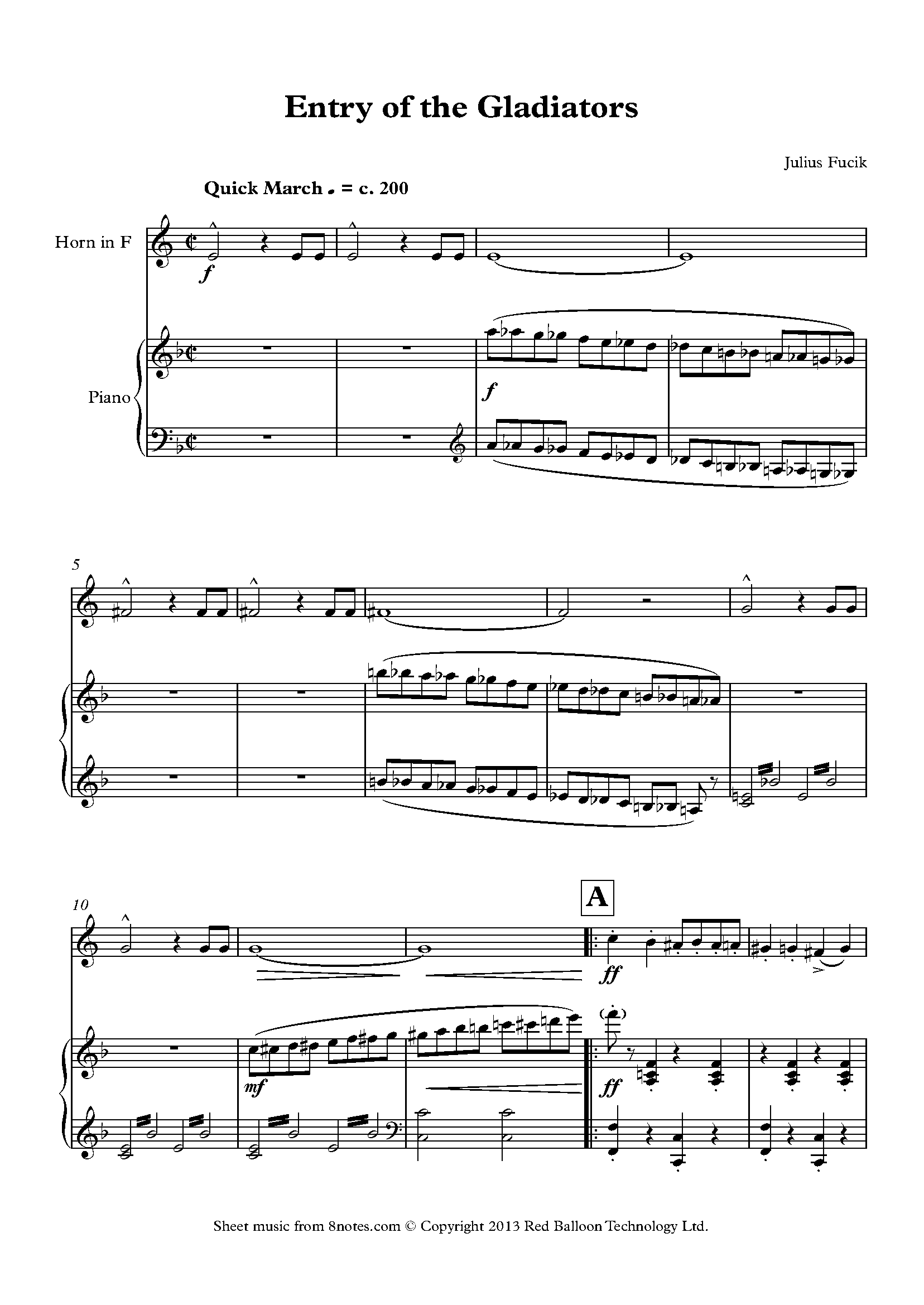 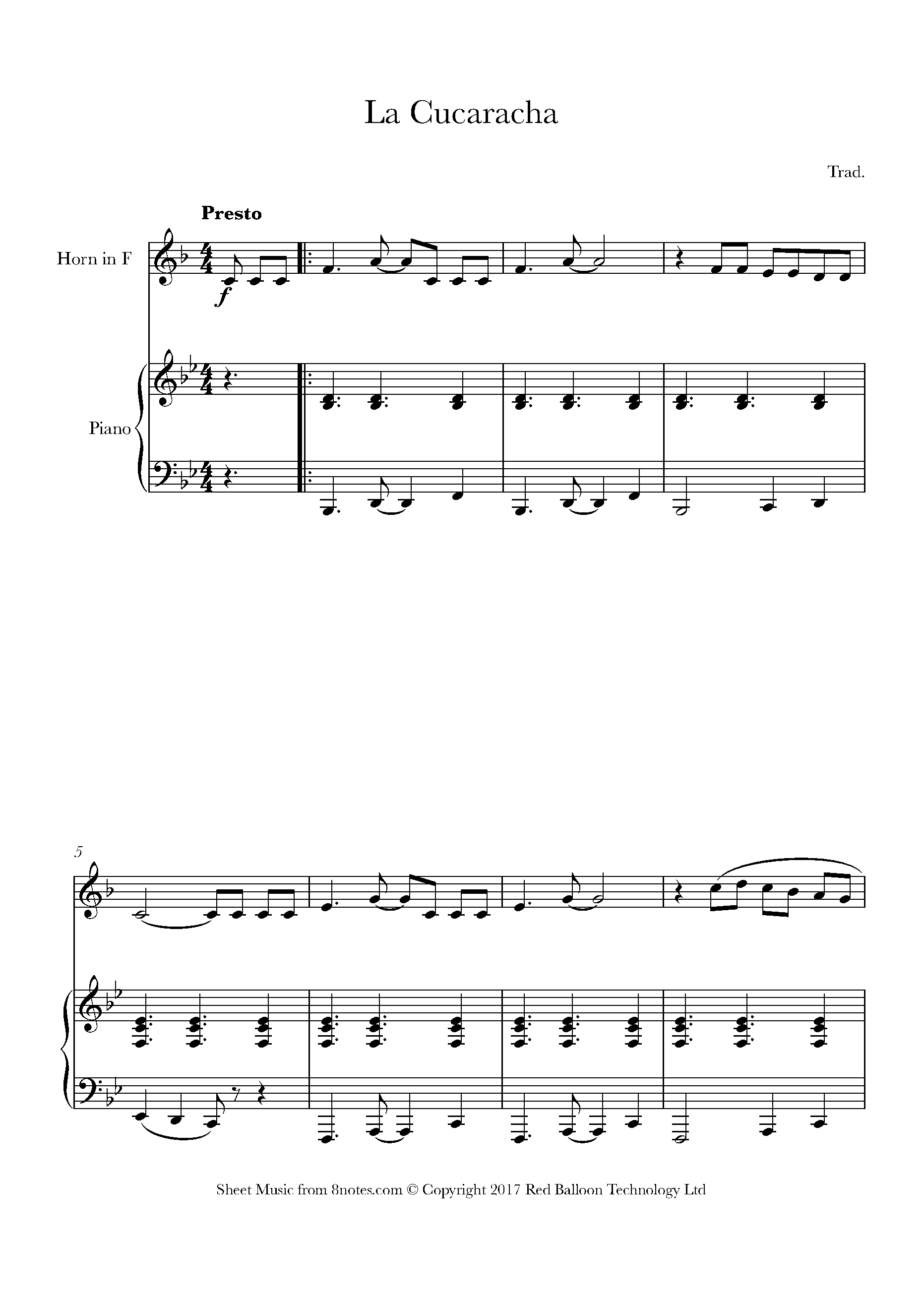 The "Duetto buffo di due gatti" ("Humorous duet for two cats") is a popular performance piece for two sopranos which is often performed as a concert encore. The "lyrics" consist entirely of the repeated word "miau" ("meow"). Sometimes it is also performed by a soprano and a tenor, or a soprano and a bass.

While the piece is typically attributed to Gioachino Rossini, it was not actually written by him, but is instead a compilation written in 1825 that draws principally on his 1816 opera, Otello. Hubert Hunt putatively claims that the compiler was Robert Lucas de Pearsall, who for this purpose adopted the pseudonym "G. Berthold". 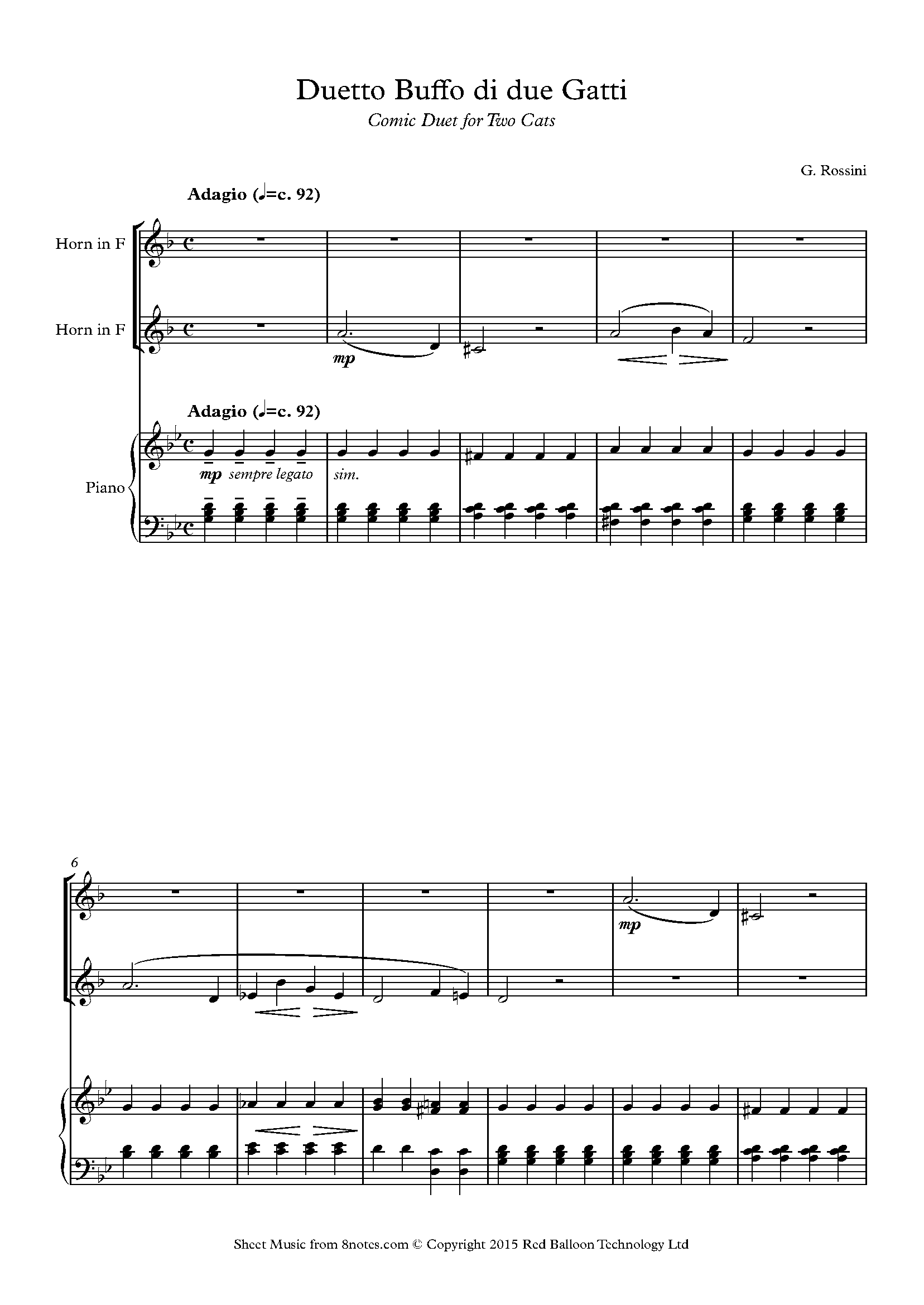 4.   Saint-Saens  -  The Elephant (from Carnival of the Animals)

"The Elephant" is the fifth movement from Saint-Saens beloved suite "Carnival of the Animals." Marked "Allegro pomposo", it uses the double bass, one of the lowest-sounding members of the orchestra, to characterise the lumbering heft of the pachyderm. There is also a double joke—the theme is taken from works by Mendelssohn and Berlioz, in their original form written for lighter instruments (flutes, violins etc.), emphasising the comical effect in their transference to the larger instrument. 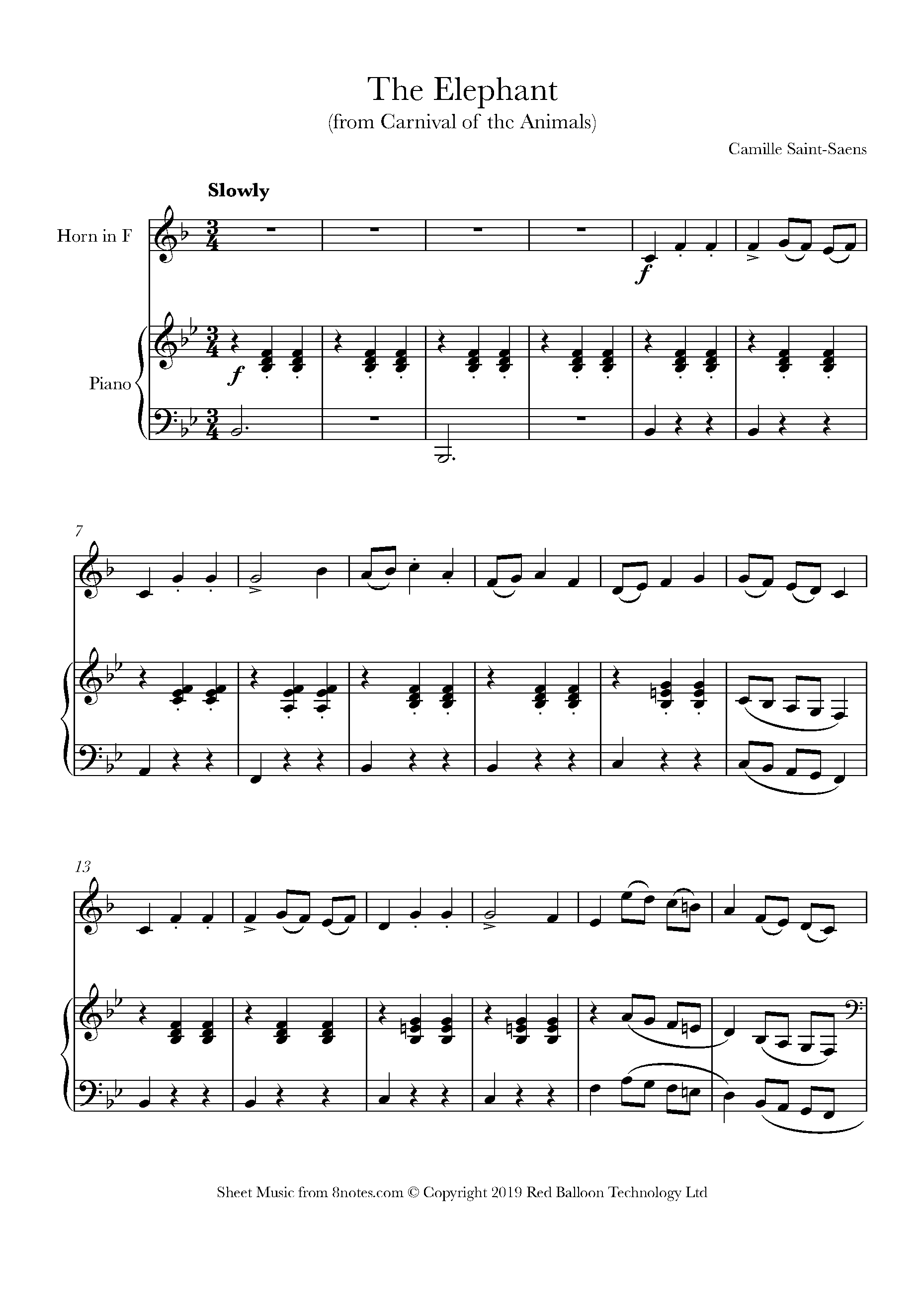 The Elephant (from Carnival of the Animals) 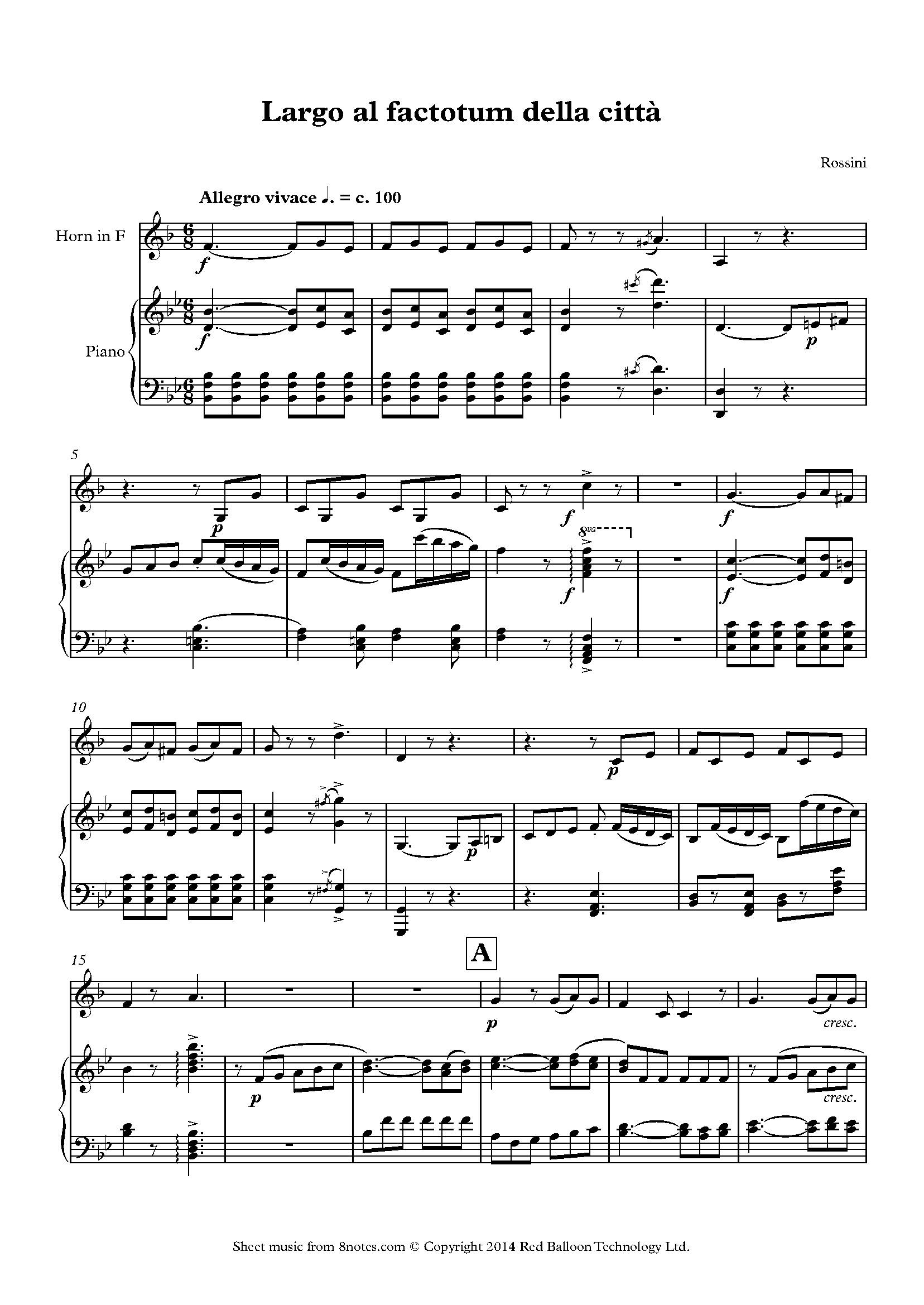 Mozart's "A Musical Joke" K.522 is a divertimento for two horns and string quartets written in 1787. The music is intentionally written to be funny, being liberally sprinkled with obtrusively clumsy, mechanical and over-repetitive composition, together with passages evidently designed to mimic the effects of inaccurate notation and inept performance. In the UK the music was well-known for its use in the BBC's "Horse of the Year" programme. 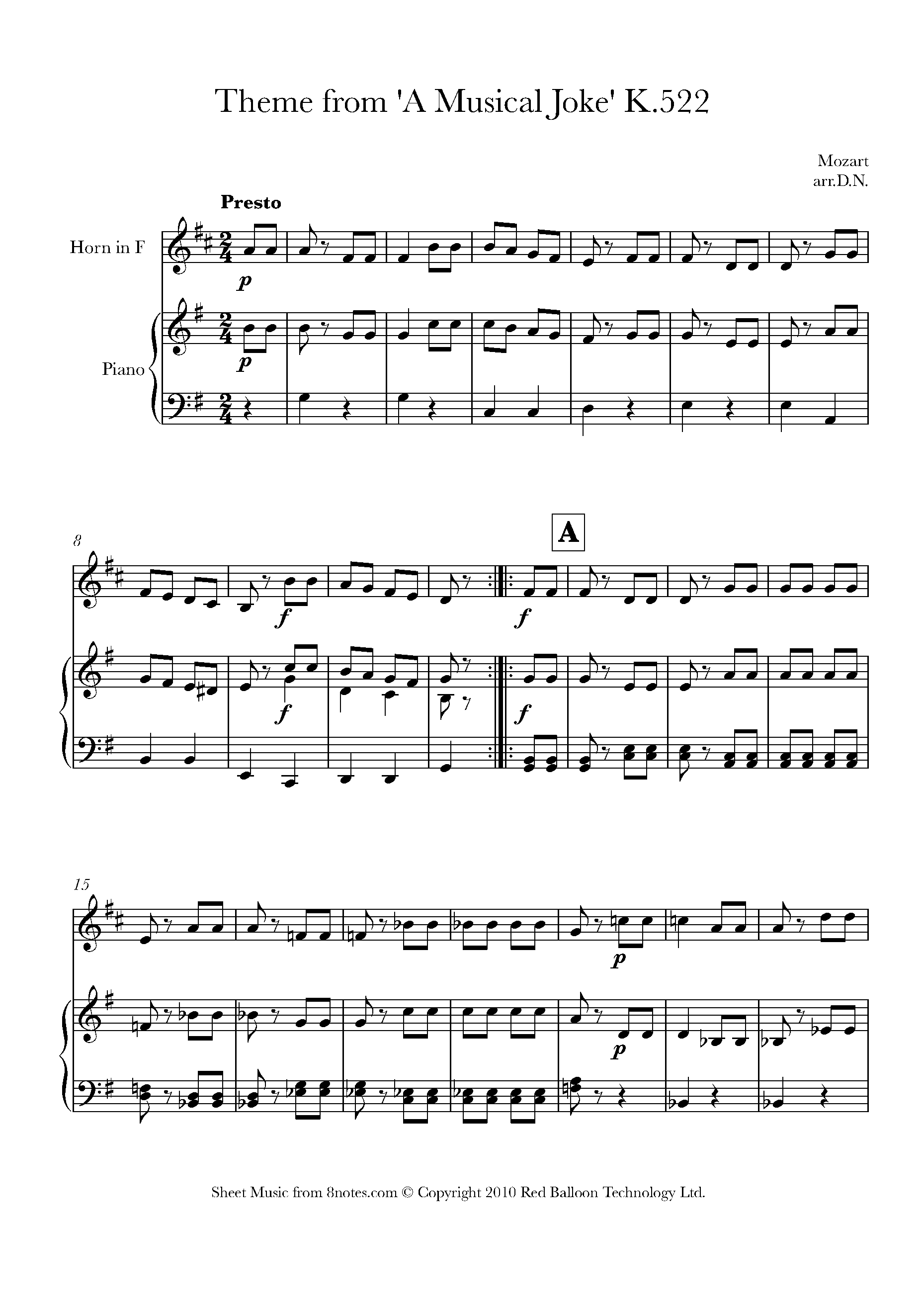 Theme from A Musical Joke K.522

Haydn's String Quartet, Op. 33 No.2 derives its nickname "The Joke" from the conclusion of the fourth moment. It begins with a grand pause that makes the audience wonder if the piece is over. This is followed by a sudden forte (marked "Adagio") that shocks the audience. After this, the first violin plays the A theme of the opening phrase with rests interrupting the music every two bars. The rests get progressively longer, giving the impression that the piece is over many times in a row, after which the music ends abruptly with a repeat of half of the movement's opening phrase, leaving the work hanging in mid-air. 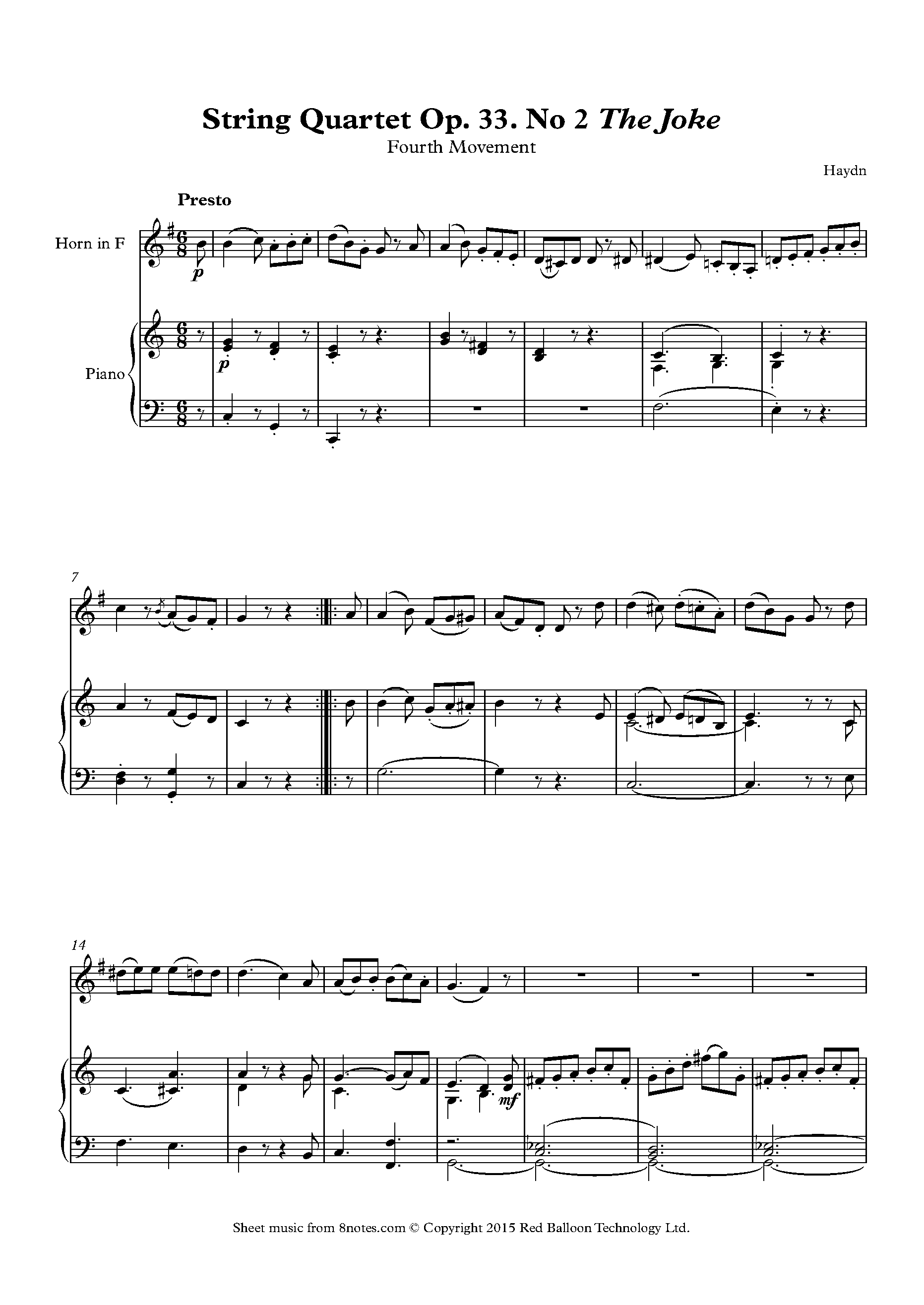 8.   Sullivan  -  I am the Very Model of a Modern Major-General (Pirates of Penzance) 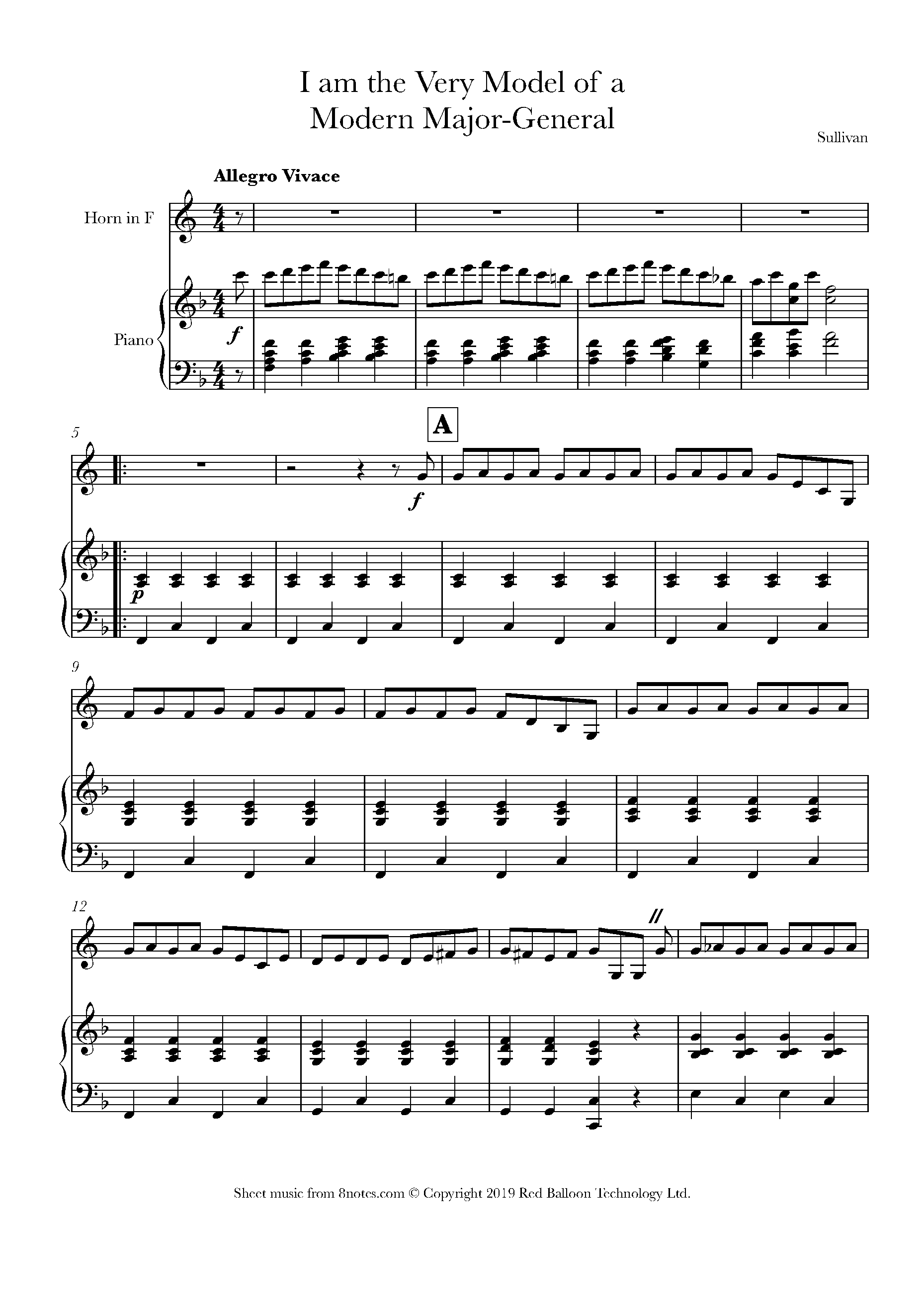 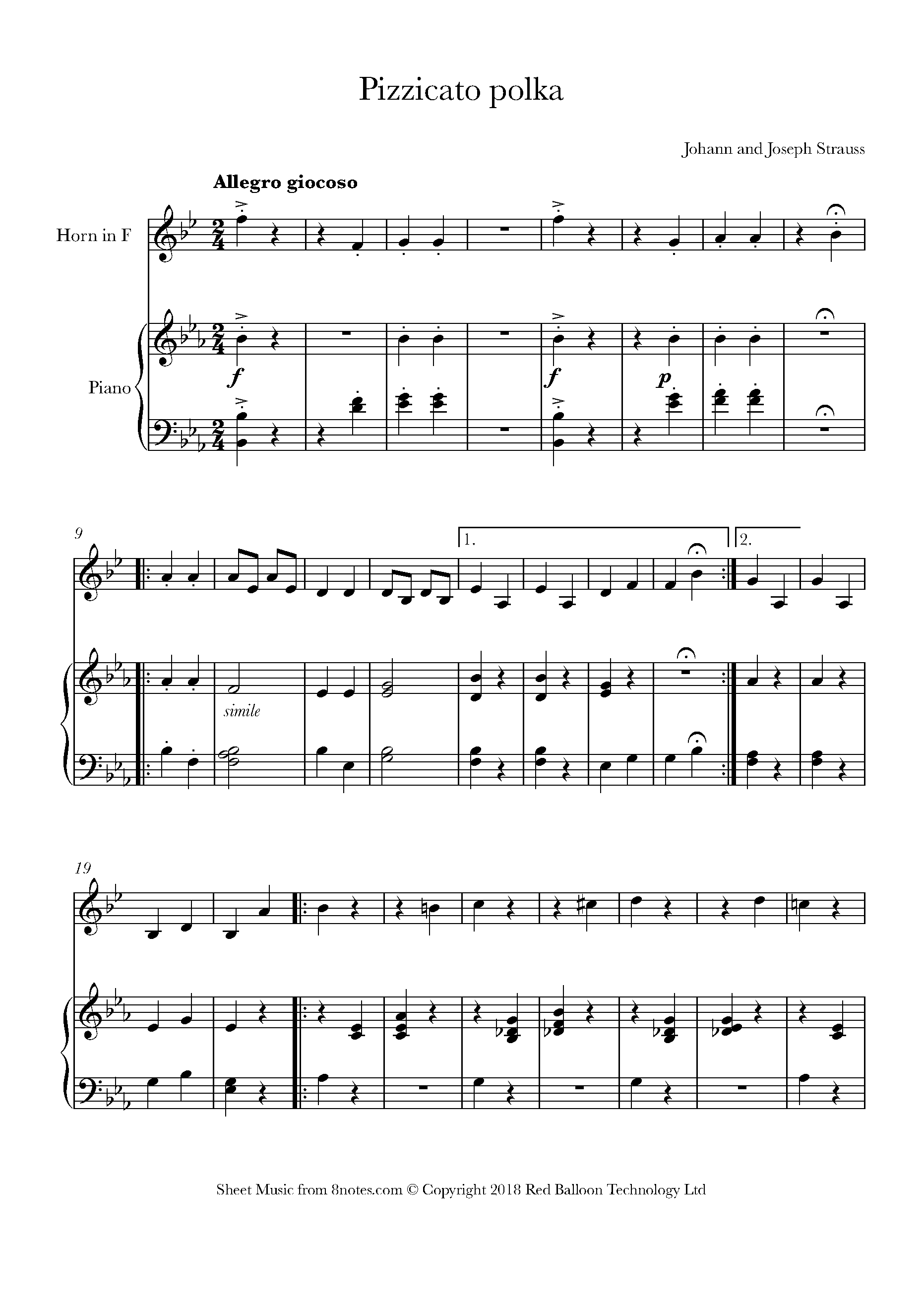 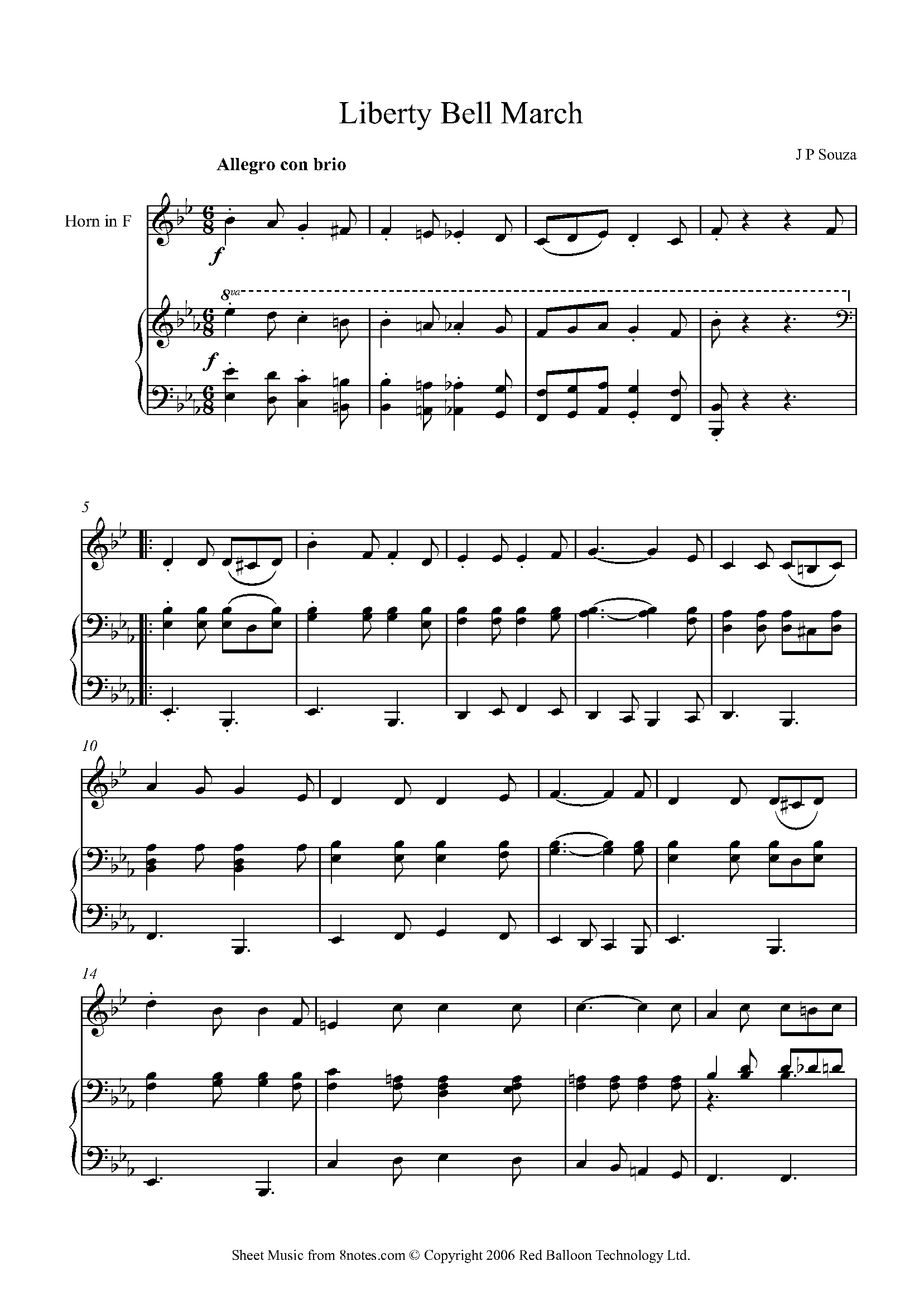 Dvořák's Op. 101 Humoresques (literally a pluralised form of "Humorous") is a collection of 8 works for piano. The seventh is one of the most famous of all piano works. In the US its humorous nature was reinforced though its use as a setting for humorous verses regarding passenger train toilets, with the words "Passengers will please refrain from flushing toilets while the train is standing still within the stationhouse." 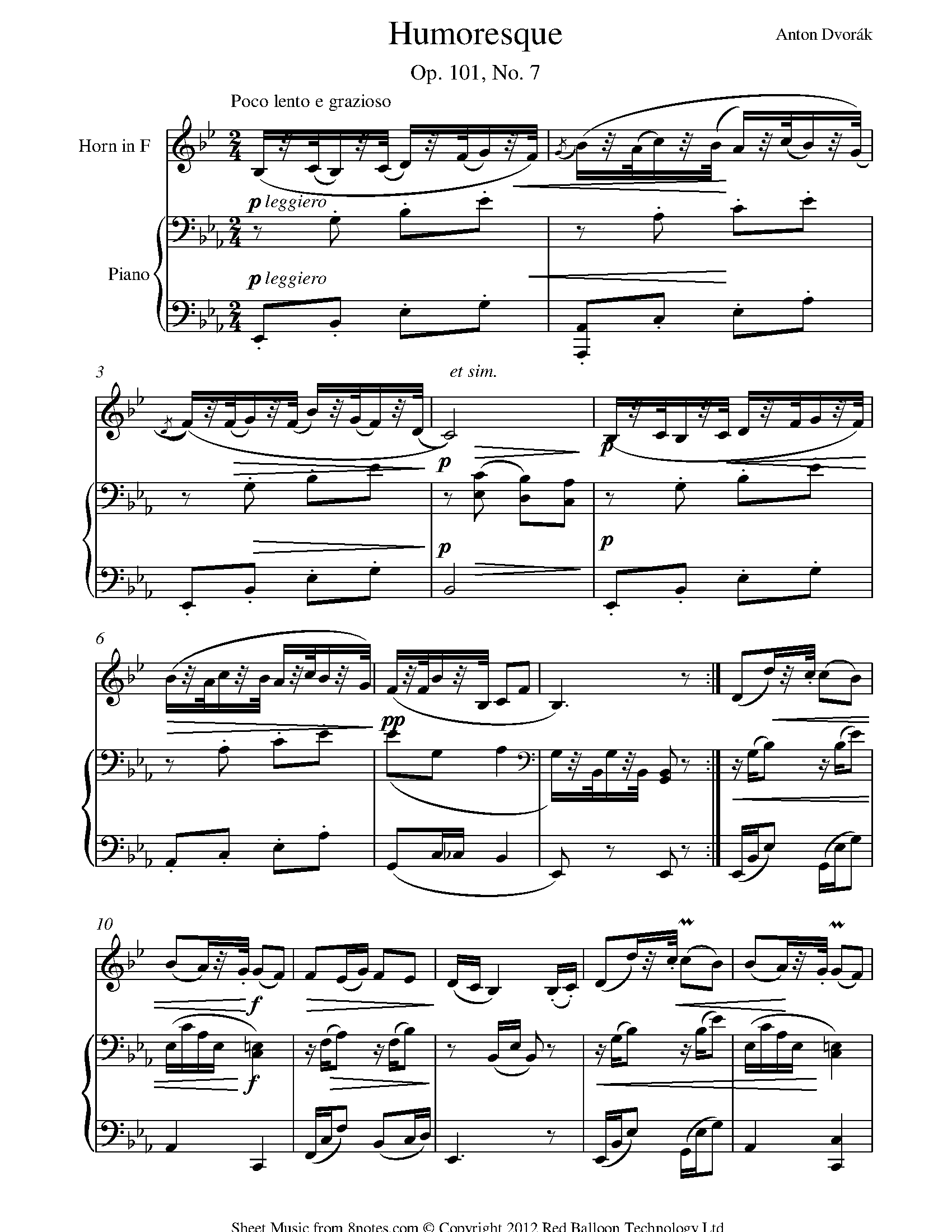 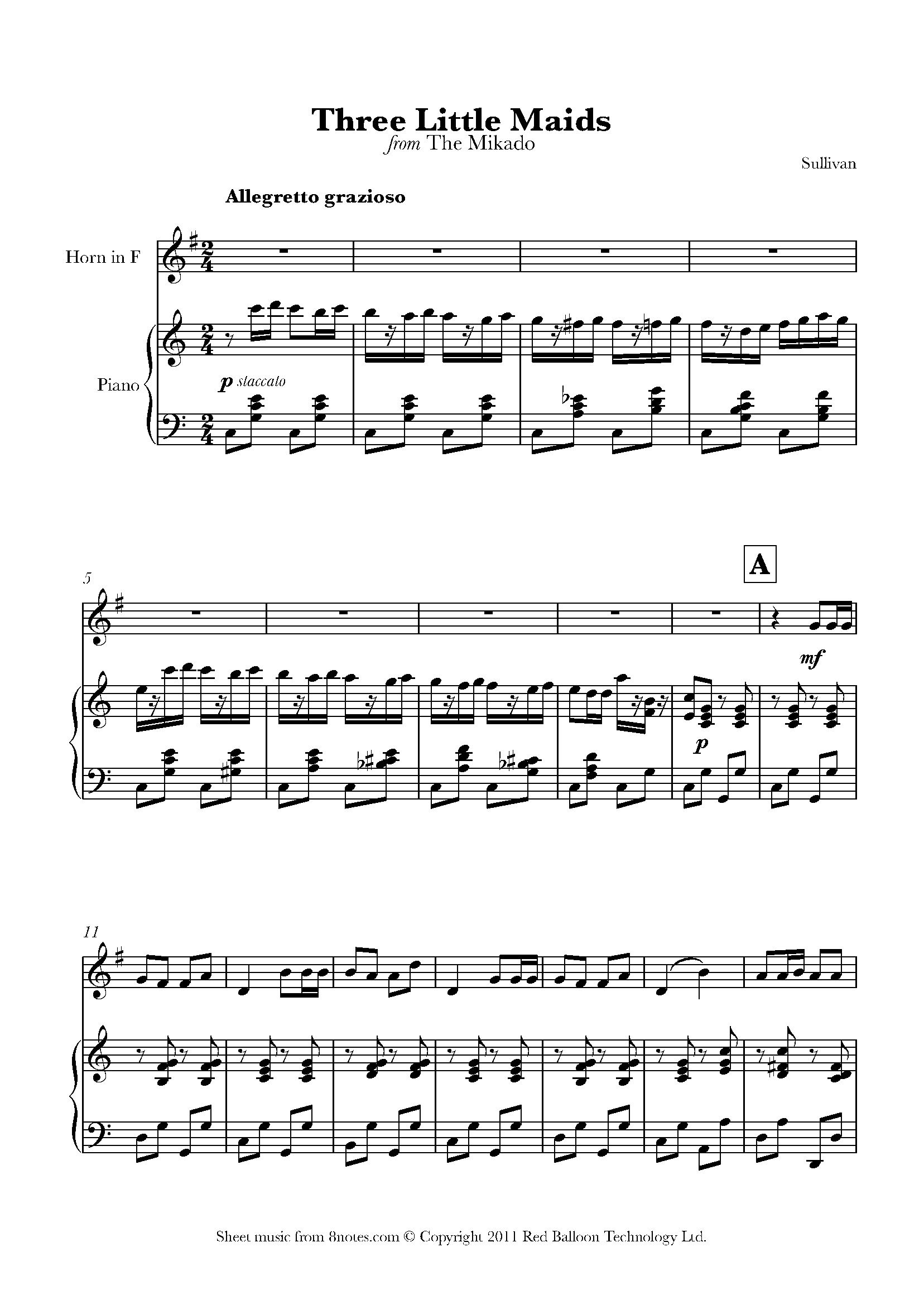