A collection of songs from the Tin Pan Alley era in American music for voice and piano. Easy to Advanced Level.
Tin Pan Alley is the name given to the collection of New York City music publishers and songwriters who dominated the popular music of the United States in the late 19th century and early 20th century. The name originally referred to a specific place: West 28th Street between Fifth and Sixth Avenue in Manhattan.

Take Me Out to the Ball Game is a 1908 Tin Pan Alley song by Jack Norworth and Albert Von Tilzer which has become the unofficial anthem of North American baseball, although neither of its authors had attended a game prior to writing the song. The chorus of the song is traditionally sung during the middle of the seventh inning of a baseball game. Fans are generally encouraged to sing along, and at some ballparks, the words "home team" are replaced with the team name. 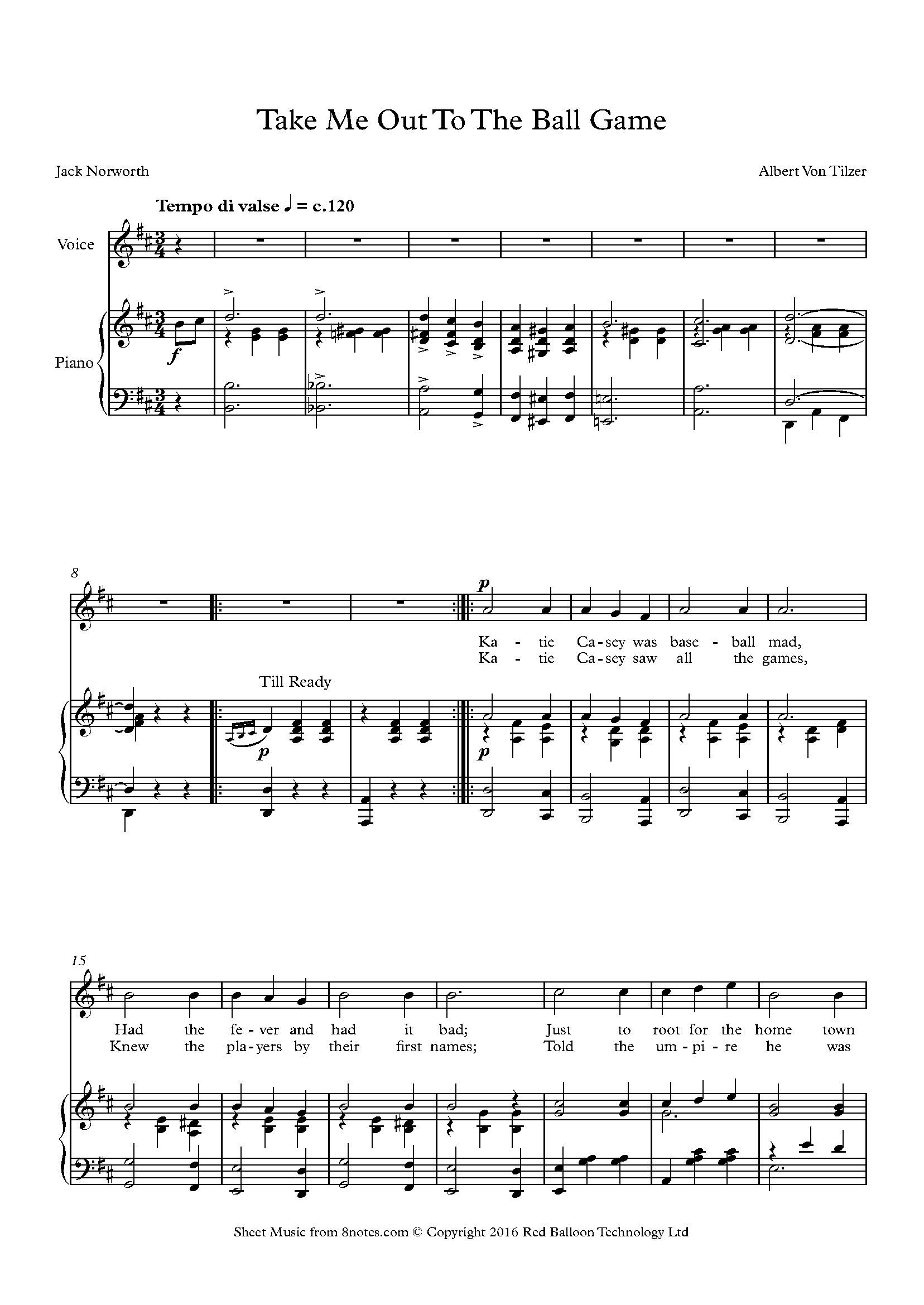 Take Me Out to the Ball Game

"By The Light of the Silvery Moon" or "By the Light of the Silv'ry Moon" is a popular song written by Gus Edwards with lyrics by Edward Madden. It was one of a series of moon-related Tin Pan Alley songs of the era. It was first performed on stage by Lillian Lorraine in 1909 and been recorded many times since, including by Fats Waller, Dorris Day, Ray Charles and Julie Andrews. The song has been used in a great many television shows and motion pictures. A film of the same title was released in 1953, starring Doris Day. It served as a sequel to "On Moonlight Bay," which also starred Doris Day. 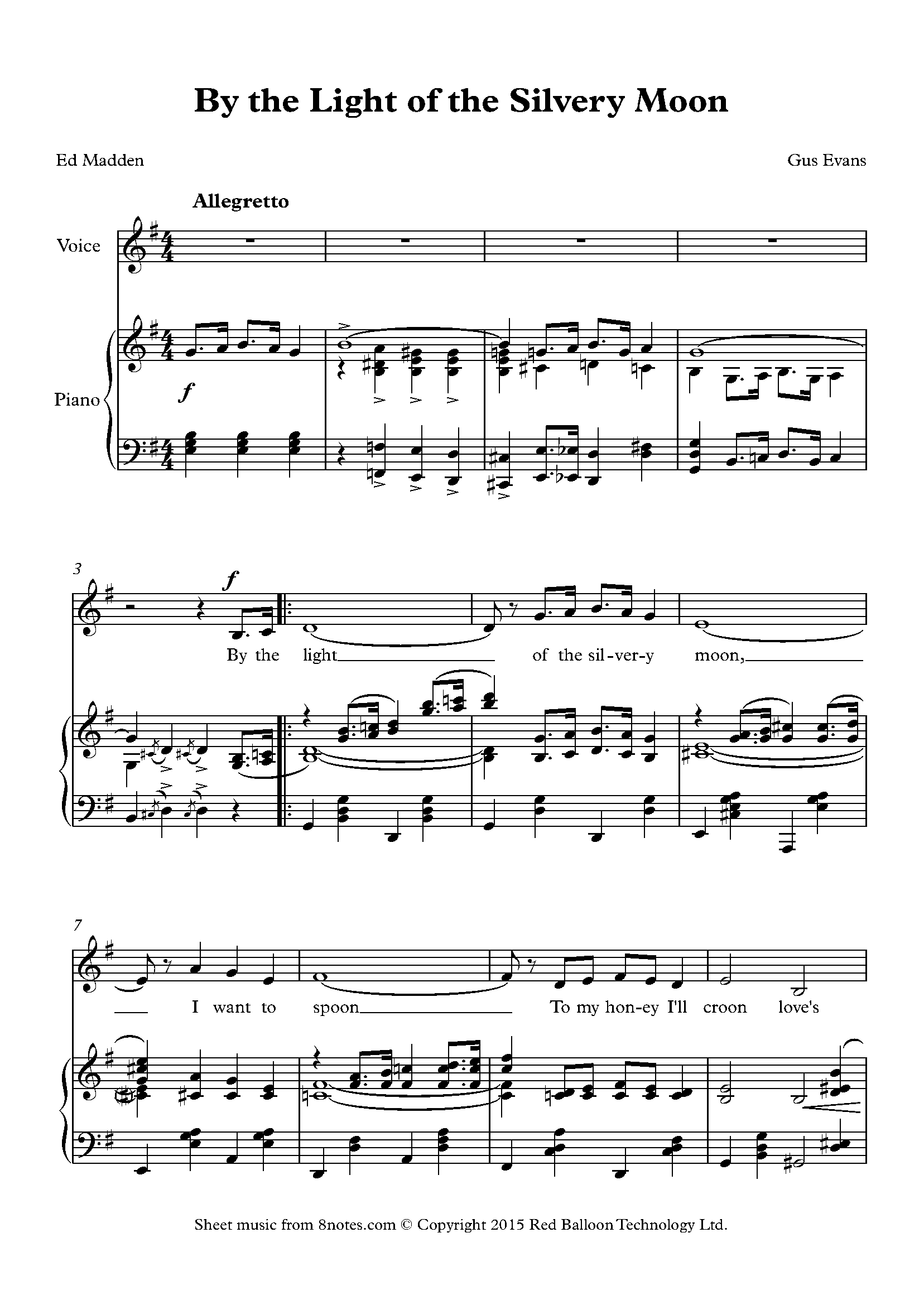 By the Light of the Silvery Moon

"In the Good Old Summer Time" is an American Tin Pan Alley song first published in 1902 with music by George Evans and lyrics by Ren Shields. It was one of the big hits of the era, selling popular sheet music and being recorded by various artists, including John Philip Sousa's band in 1903. It has remained a standard often revived in the decades since. The song appeared in many films, including the Judy Garland film named after it; "In the Good Old Summertime." The song appeared in the episode titled "Tipping the Scales" of the hit PBS show "Arthur," and featured in the 1930 Laurel and Hardy short "Below Zero" in ironical terms, sung during a snowstorm. 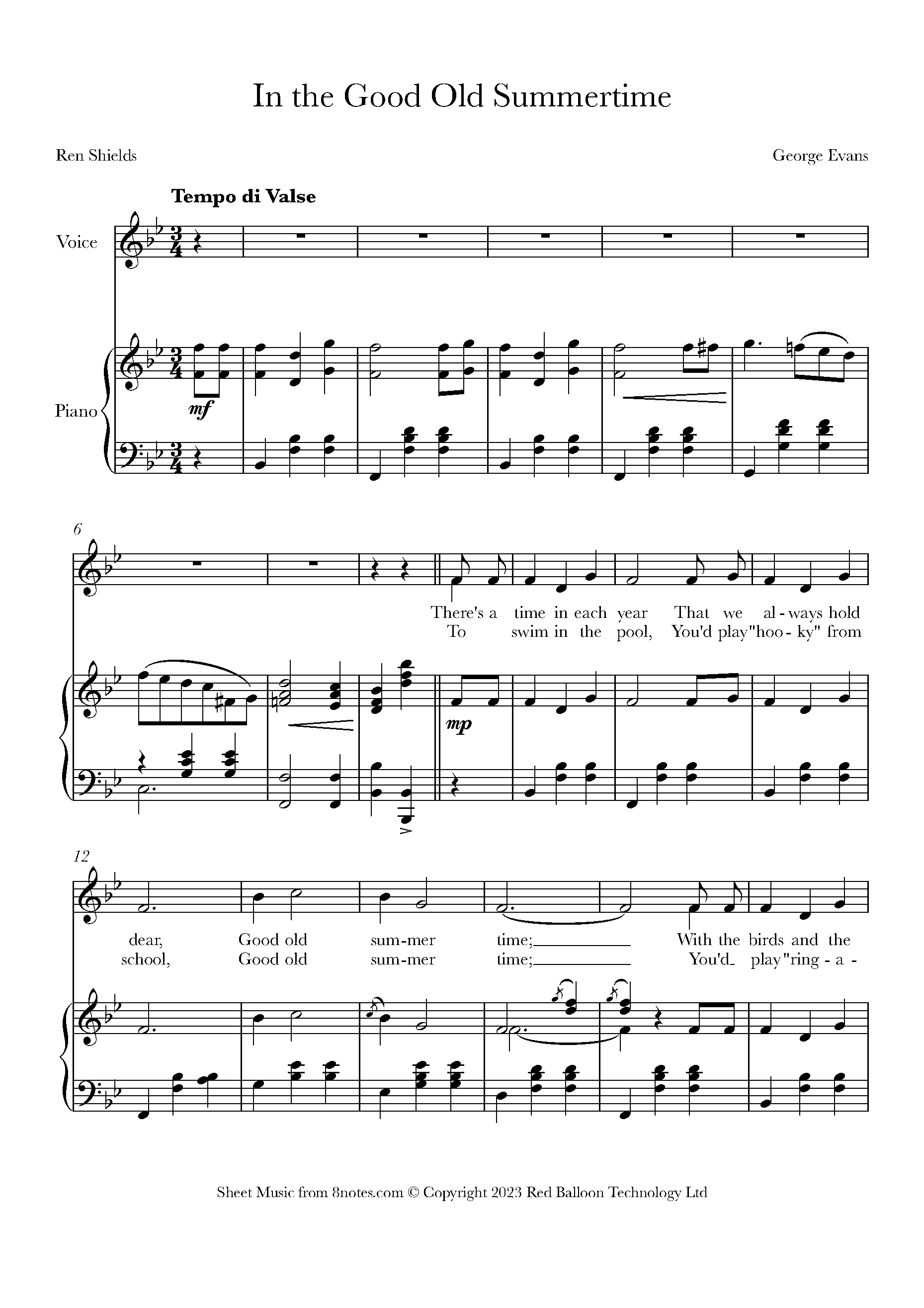 In The Good Old Summertime

One of the most successful songs in Tin Pan Alley History, selling over 2 million copies of the sheet music in 1892. In the song, an uncle tells his niece why he has never married: he saw his sweetheart kissing another man at a ball, and he refused to listen to her explanation. Many years later, after the woman had died, he discovered that the man was her brother. 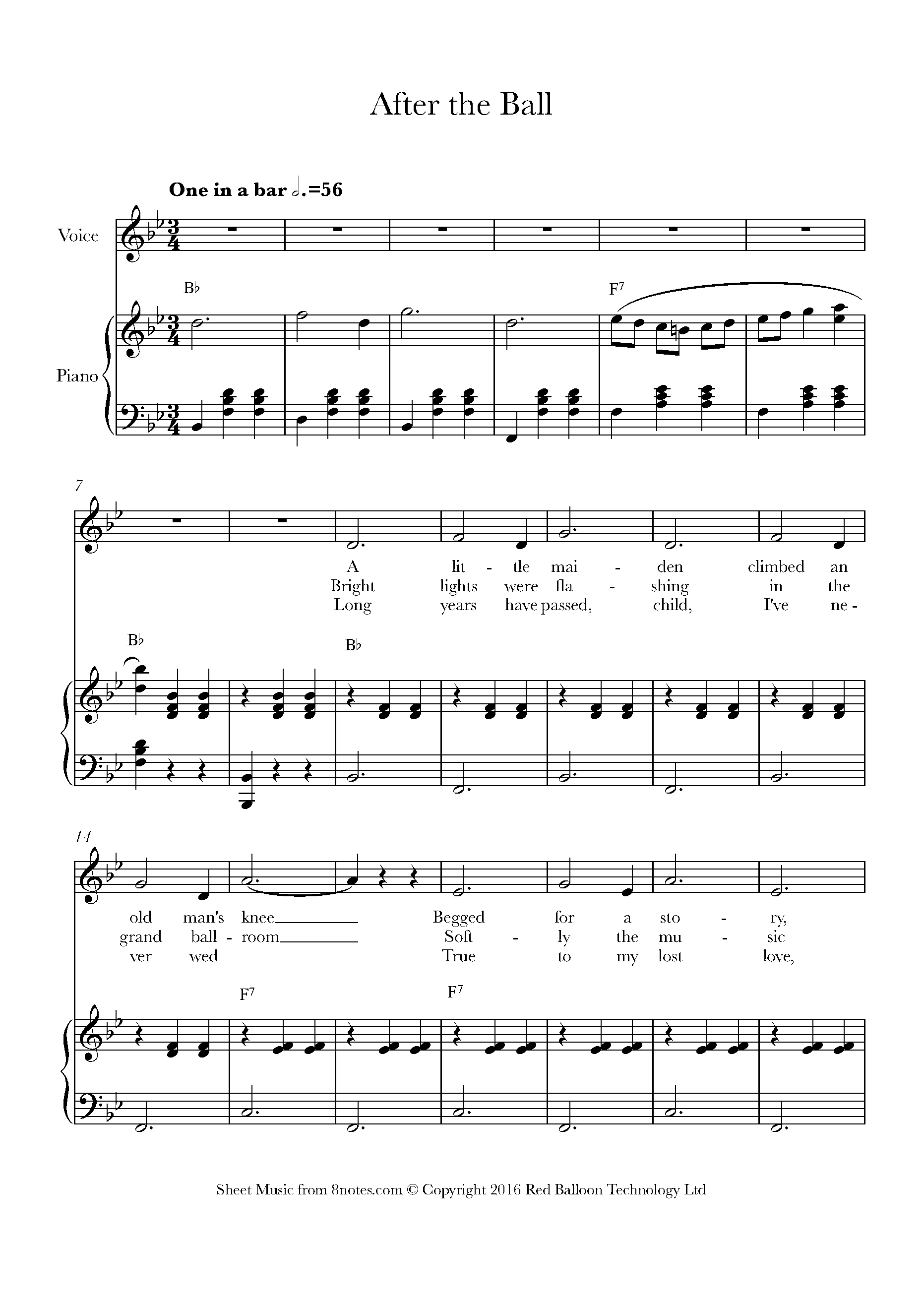 First published in 1910, the composition was originally recorded by Blanche Ring and was, for a time, her signature song. A duet by Ada Jones and Billy Murray was recorded in November 1910 and released the following year. There have been many subsequent recordings of the pop standard. Appearances in popular culture include in the 1997 hit film "Titanic," in the "The Simpsons" and the television series "Peaky Blinders." 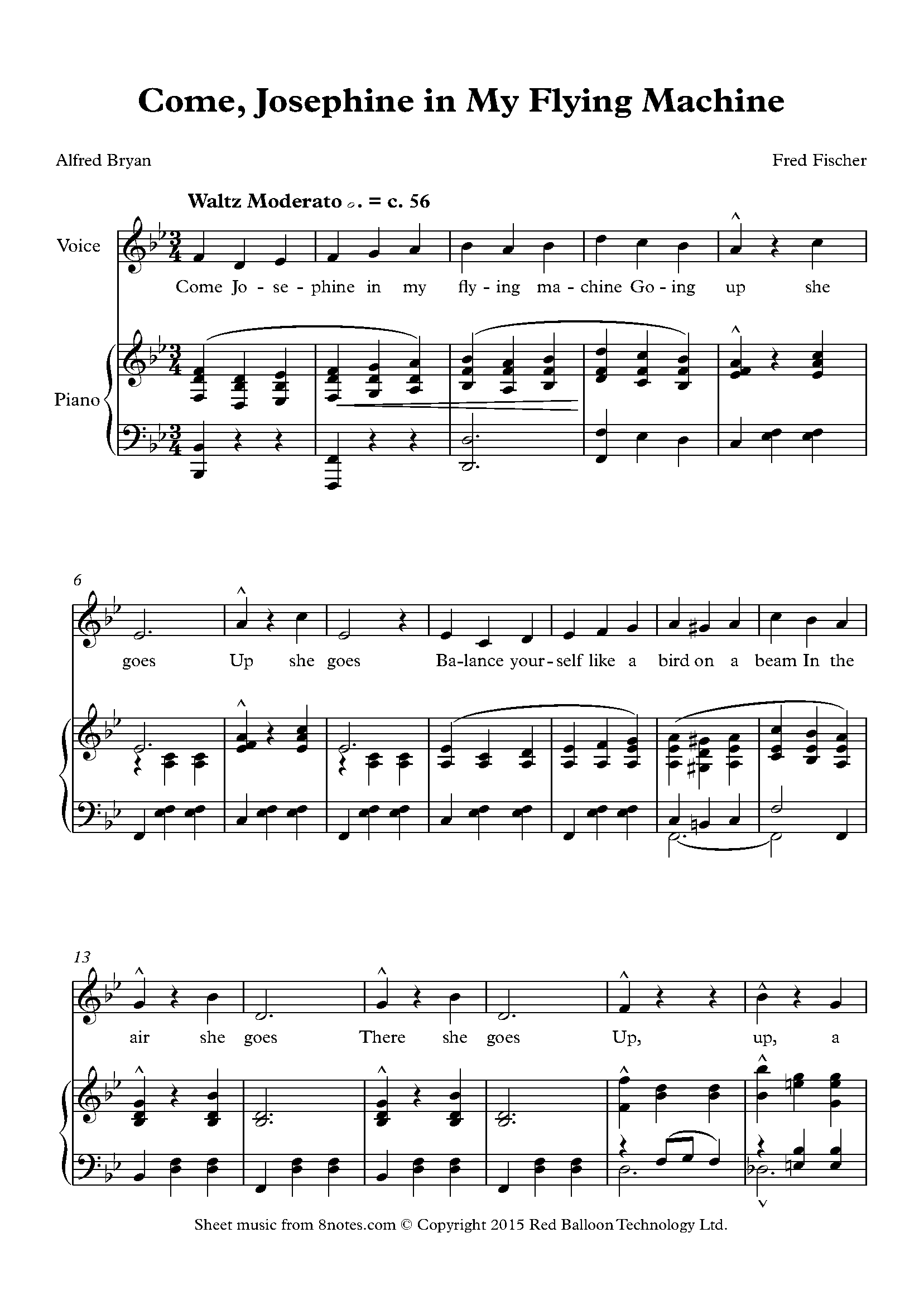 Come, Josephine in My Flying Machine

"Hello! Ma Baby" is a Tin Pan Alley song written in 1899 by the songwriting team of Joseph E. Howard and Ida Emerson, known as Howard and Emerson. Its subject is a man who has a girlfriend he knows only through the telephone; it was the first well-known song to refer to the device. The song was first recorded by Arthur Collins on an Edison 5470 phonograph cylinder. The short piano piece "Le petit nčgre" by Claude Debussy from 1909 features a melody very similar to "Hello! Ma Baby", and may have been inspired by the song. 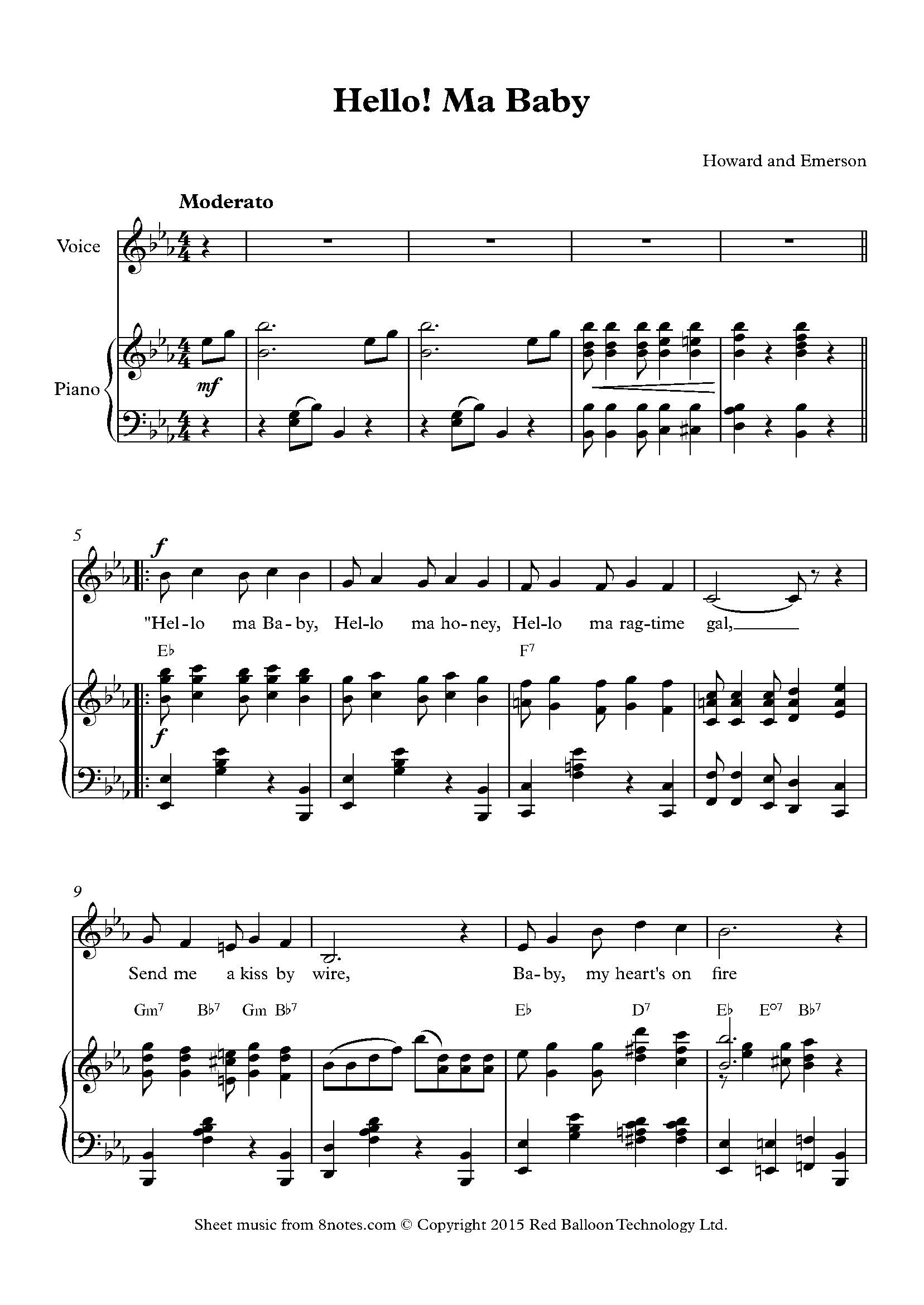 "Shine on, Harvest Moon" is a popular early-1900s song credited to the married vaudeville team Nora Bayes and Jack Norworth. It was one of a series of moon-related Tin Pan Alley songs of the era. The song was debuted by Bayes and Norworth in the Ziegfeld Follies of 1908 to great acclaim. It became a pop standard, and continues to be performed and recorded into the 21st century. 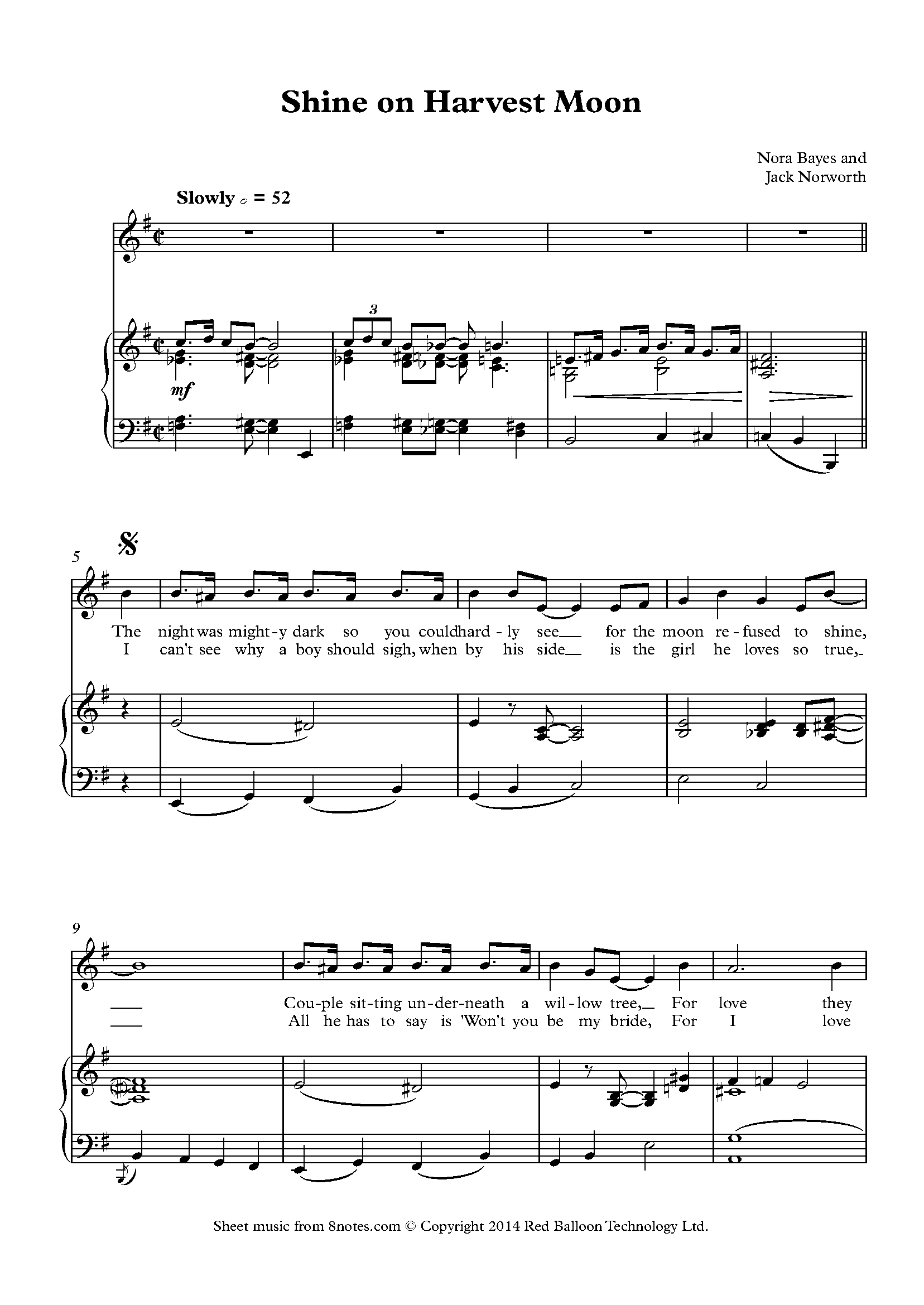 "I'm Forever Blowing Bubbles" is a popular American song written in 1918, released in late 1919, becoming a number one hit for Ben Selvin's Novelty Orchestra. It was written by John Kellette with lyrics by James Kendis, James Brockman and Nat Vincent. It has been revived and adapted over the years, serving as the anthem of Premier League club, West Ham United and for the Norwegian ice hockey club Sparta Warriors. It has also appeared on the silver screen, including the 1931 gangster movie "The Public Enemy," starring James Cagney, in Ken Russell's "Women in Love" (1969) and in Woody Allen's "Sweet and Lowdown" (1999). 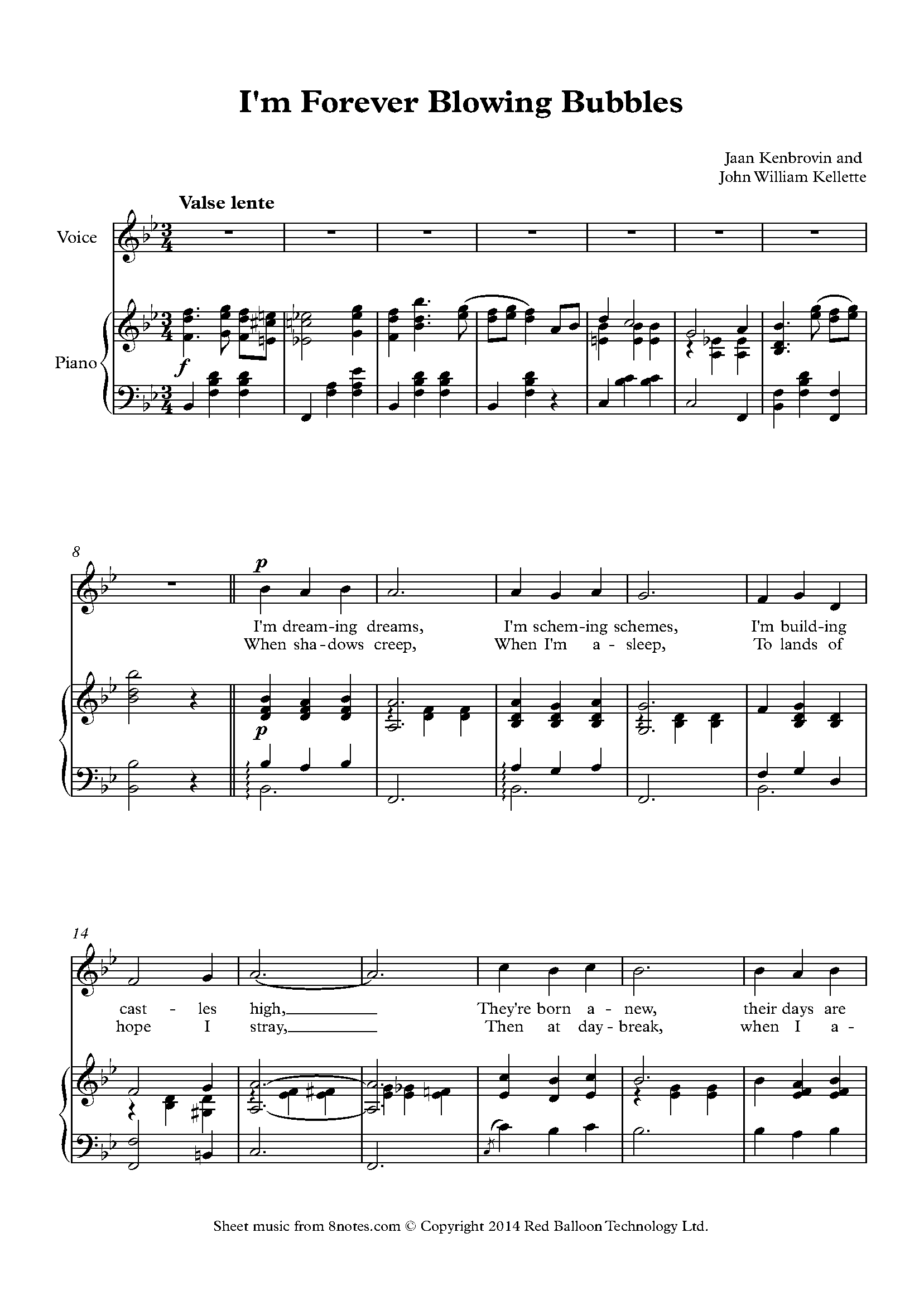 The popular song "Fifteen Years on the Erie Canal" was written in 1905 by Thomas S. Allen after Erie Canal barge traffic was converted from mule power to engine power, raising the speed of traffic. The tune is sadly nostalgic. Also known as "Low Bridge, Everybody Down," "The Erie Canal Song," "Mule Named Sal," and "Fifteen Miles on the Erie Canal," the song memorializes the years from 1825 to 1880 when the mule barges made boomtowns out of Utica, Rome, Syracuse, Rochester, and Buffalo, and transformed New York into the Empire State. 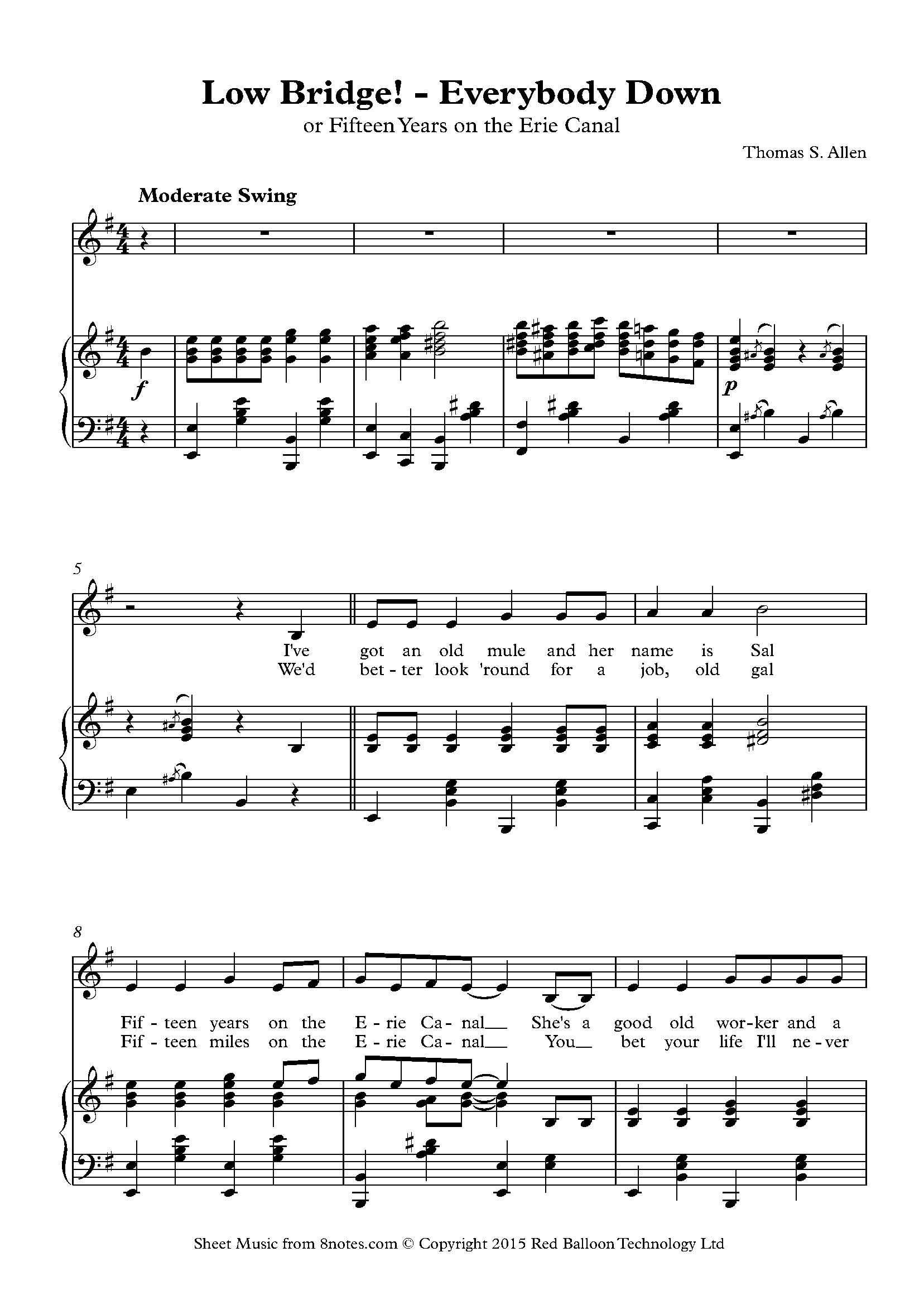 Low Bridge! - Everybody Down (or Fifteen Years on the Erie Canal)